By Adam Scott and Matt Maiorana

There’s a clear logic to the global challenge of addressing climate change: when you’re in a hole, stop digging. If we’re serious about tackling the global climate crisis, we need to stop exploring for, developing, and ultimately producing and consuming fossil fuels. This inevitably leads to the decline of the oil, gas, and coal industries.

A textbook example of how NOT to manage the decline can be found in the painful history of the Newfoundland cod fishery.

One of eastern Canada’s premier industries, the cod fishery defined the economy and the culture of coastline communities for centuries. Commercial fishing off the Grand Banks of Newfoundland dates back as far as 1500, but it wasn’t until factory trawlers were introduced around 1950 that catches became increasingly unsustainable. At its peak in 1968, the catch of northern cod in the Atlantic reached 1.9 million tons. However, the impact of overfishing soon became apparent.

In the 1980s, Canada’s Department of Fisheries and Oceans received increasingly dire warnings about the rapidly diminishing fish stock from fishermen and scientists, but these were largely ignored. Much like climate science models today, these marine science models were often ignored when setting quotas and planning for future catches. These plans weren’t set by the scientific models, but instead by politicians. Despite mounting evidence, the Department of Fisheries and Oceans continued to boost catch quotas without regard to the impacts of their actions. A 1992 Canadian Department of Fisheries and Oceans audit found that the science regarding the health and management of cod stocks “was gruesomely mangled and corrupted to meet political ends.” As a result, fish stocks continued to plummet. 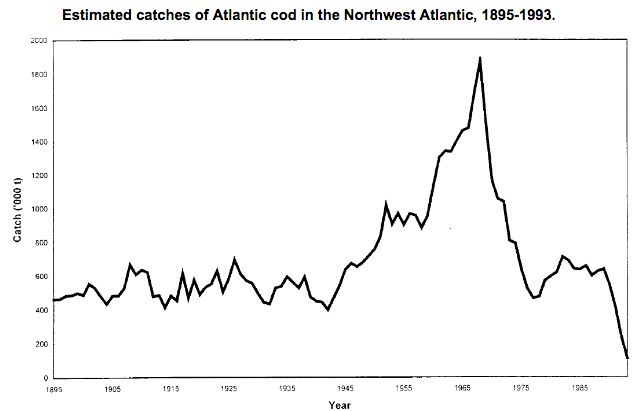 In 1992, even while confronted with evidence of a fishery on the verge of collapse, the Canadian government increased the allowed catch. Soon harsh reality set in, and later that same year, Minister of Fisheries and Oceans John Crosbie announced the complete closure of Newfoundland and Labrador’s northern cod fishery. The result was catastrophic for those dependent on the cod industry for their livelihoods.

By ignoring the science and testimonies of community-based fishermen in front of them, the Canadian government not only put survival of the cod at great risk, but also miserably failed to protect the workers and communities dependent on the resource while threatening access to the food many had relied on for centuries.

This failure to manage the cod fishery’s decline had profound and lasting social, food justice, and economic impacts. Many “outport communities” which had relied on cod for generations were left with nothing. Roughly 40,000 people were laid off as over 1,300 communities were deprived of an important source of income – the largest mass layoff in Canadian history, with the impacts still being felt more than 20 years later.

The government eventually enacted financial aid, retirement, and retraining programs for hard-hit communities, but these programs proved both expensive and ineffective after the fact, and didn’t address the food access issues. If programs to carefully manage the industry’s decline had been implemented early on – when both fishermen and the science began providing clear warnings of the problem – significant harm could have been prevented.

There are strong parallels between the overfishing of the cod industry, and the exploitation of fossil fuels. Both the science and impacted communities are clear in saying that the fossil fuel industry must decline, but ongoing denial and resistance from corporations and politicians continues to increase the future harm that will befall communities dependent on the fossil fuel economy.

Coal companies are already experiencing this in the United States, where outsized industry influence in Washington DC and coal-rich states has been delaying coal’s inevitable decline for decades. Reality is finally catching up, with coal company bankruptcies piling up over the past few years. Ultimately, it is the workers and taxpayers who lose out, whether it’s pensions being put at risk or self-bonding loopholes that allow bankrupt companies to escape their cleanup responsibilities. Instead of early intervention to ensure a gradual and careful transition that puts people first, decisions are made in rushed and secretive fashion only after companies go bankrupt. And of course, it comes as no surprise that these decisions often favor executives and those with the deepest pockets. 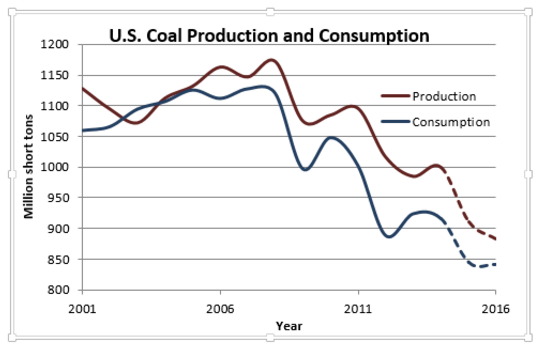 Like the cod fishery in Newfoundland, what’s needed for the fossil fuel industry is a managed decline and just transition for those currently dependent on the industry. Instead of politicians giving stump speeches about bringing back jobs they can’t possibly deliver on, they should be offering plans to diversify the economy, fund training programs, and provide support to communities currently dependent on dead-end industries.

We don’t have all the answers to what a just transition looks like, but we’re starting to see indications of how it could happen. In eastern Kentucky, where the decline of the coal industry has decimated communities, former coal miners are finding employment with emerging technology companies that are intentionally investing in these towns and people. Federal and state agencies have also combined with private enterprise to fund innovative programs in the Appalachian region to develop creative skills in arts, crafts, and tourism. These are only small examples, but they could inform a more comprehensive plan for a just transition.

A just transition, by its very nature, cannot happen without the people impacted leading the discussion. It must begin and end with the communities that are living with and, in some cases, dependent on the toxic footprint of the fossil fuel industry.

We need an honest and open dialogue about the challenges we face. This means a managed decline of the fossil fuel industry with a coherent plan for addressing the challenges. We must avoid repeating the mistakes of the Canadian cod fishery, and ensure a just transition to a clean economy while helping workers and communities succeed in the future.