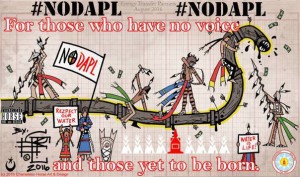 Later today the U.S. District Court in Columbia is expected to decide whether construction of the highly controversial North Dakota Access Pipeline can continue.

In an eagerly anticipated hearing, the judge is set to rule on a request by the Standing Rock Sioux tribe to halt construction of the $3.7 billion, 1,100-mile pipeline which, if built, will transport fracked crude oil from the Bakken shale to refineries on the U.S. Gulf Coast.

If the Standing Rock Sioux are successful it would mean the U.S. Army Corps of Engineers would be forced to withdraw permits for construction of the pipeline. And if the judge rules in the tribe’s favour, it would be a major blow to the oil industry and a hugely important victory for the First Nations defending their land and water.

The pipeline is due to cross the Missouri River, from which the Standing Rock Sioux draw their water. The pipeline route also crosses several sacred burial and prayer sites, some of which have already been damaged by bull-dozers.

The protest against the pipeline is fast becoming one of the most important and iconic struggles against the fossil fuel industry and thousands of people, from members of the Standing Rock Sioux Tribe, other First Nation tribes from the US and Canada, as well as other supporters are now camped close to the pipeline route. It is now seen as the largest First Nations mobilisation in 150 years.

Many more people have arrived this week after after security guards used dogs and pepper spray against the protectors over the weekend.

Standing Rock Sioux Chairman Archambault II is amazed at how many people have turtned up to fight the pipeline. “It’s overwhelming I never expected it to be this big, but I’m thankful and proud to be Native American, because I know that with unity, there’s a lot of things we can overcome.”

Yesterday, in a sign of the rising tensions, North Dakota’s governor deployed 100 National Guard troops to the area to assist state and county Police.

In response the Standing Rock Sioux tribe issued a statement calling for peace regardless of the ruling. Archambault II said: “We call upon all water protectors to greet any decision with peace and order. Even if the outcome of the court’s ruling is not in our favor, we will continue to explore every lawful option and fight against the construction of the pipeline. Any act of violence hurts our cause and is not welcome here. “

He continued: “We invite all supporters to join us in prayer that, ultimately, the right decision—the moral decision—is made to protect our people, our sacred places, our land and our resources.”

The First Nations are calling themselves water protectors not protesters.  “I am not a protester”, says one of the women leading the fight against the pipeline, Kandi Mossett. “I am protecting the very essence of what I am made up of, which is mostly water. I am protecting that for my future generations and all those who can’t speak for themselves. Women in my culture are the keepers of the water”.

Mossett adds: “This is so much bigger than one pipeline. It is the fossil fuel industry  as a whole. It is ultimately going to be something that comes back on us as humanity”

As one reporter records, from talking to people in the camps: “the cultural importance of water could not be understated. I repeatedly heard that their creation story begins with water, humans are mostly water, and without water trees cannot grow and we won’t have any air to breath. Losing this lifeline is not an option for the people here. Couple that with threats to sacred sites along the pipeline route, already being disturbed as construction begins, and people are ready for a fight.”

And even if the judge rules against them, the Standing Rock Sioux and others will continue that fight.