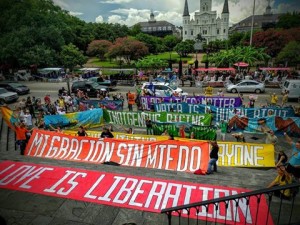 As Louisiana recovers from the worst flooding in the US since Hurricane Sandy, you would have thought that the chaos and lives lost in the flooding would force an immediate rethink from the Obama Administration regarding energy policy and our continued use of fossil fuels.

Indeed, the President has just toured the flood-affected areas of Baton Rouge in Louisiana, where he pledged to assist local residents rebuild their homes and businesses. Over one hundred thousand people have registered for Federal assistance.

“Let me just remind folks. Sometimes once the flood waters pass, people’s attention spans pass. This is not a one-off. This is not a photo-op issue,” he said, before adding “We are heartbroken by the loss of life.”

But such is the continuing disconnect between political rhetoric and reality, despite Obama’s personal pledge to help the residents of the Gulf, later today his Administration will inflict more long-term pain on the communities.

At 10 AM the Bureau of Ocean Energy Management (BOEM) will hold its first-ever live-streamed lease sale for offshore oil and gas drilling.

The sale has prompted four days of protests and marches by environmental groups and community activists under the banner headline “Another Gulf is possible”.

The coalition of groups and communities argue that:

“We, the people of the Gulf South and the Global South, stand united and firm we need a just transition for the sake of the life and livelihoods of our communities, our cultures and our ecosystems. We will no longer stand to be a sacrifice zone for this country, we demand justice and equity.

“We know that in order to do this, we must stand up to the fossil fuel empire and our elected officials, while simultaneously building, growing and healing our own relationships with each other in this movement.”

The activists were also carrying a petition which had garnered 184,000 signatures in six days calling for an end to all new drilling in the Gulf of Mexico.

“We are not just selling the Gulf. We are selling our children’s future,” one of the protesters Renate Heurich, a retired teacher, said. “We are refusing to change our lifestyle and our children will have to deal with immense problems once the climate gets more and more extreme.”

The groups will be protesting outside the lease sale again today.

The online sale, which will be held behind closed doors, is trying to by-pass previous sale disruptions by activists. For example, in March, about 150 activists protested against a lease sale off the eastern Gulf states from Louisiana to Florida.

The Agency will be trying to lease a whopping 23.8 million acre area in the western Gulf of Mexico.

To coincide with the lease sale, a new report, by a coalition of environmental and community groups, warns that burning the remaining fossil fuels under unleased federal waters in the Gulf of Mexico would release the equivalent of up to 32.8 billion tons of carbon dioxide; equivalent to the running 9,500 coal-fired power plants for a year.

The report argues that “More leasing in the Gulf of Mexico will deepen the climate crisis and the harms already being felt by people living along the Gulf Coast who face severe storms, rising seas and saltwater intrusion into fresh water”.

The recommendation is clear and simple: “President Obama should end new oil and gas leasing and begin a just transition to clean, renewable energy”.

“We can’t address climate change while expanding drilling the Gulf. This report shows that new oil and gas leasing in the Gulf would be a carbon bomb that will deepen our climate crisis,” argues Kristen Monsell, oceans attorney at the Center for Biological Diversity, one of the organisations behind the report.

Marissa Knodel, climate campaigner at Friends of the Earth added. “President Obama can solidify his climate legacy and jumpstart a just transition for Gulf Coast communities by putting an end to new oil and gas leasing in the Gulf.”

Anne Rolfes, founding director of Louisiana Bucket Brigade, which participated in Tuesday’s action and is one of the organisations publishing the report, said too. “The time is now—this moment—to end this leasing once and for all and keep this oil where it belongs: in the Gulf of Mexico, beneath the ground.”

For more information go here or here or follow the hashtag #NoNewLeases.