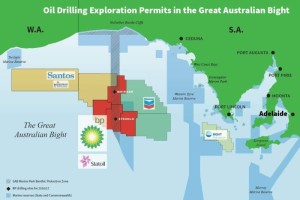 Despite growing international condemnation, oil giant BP seems intent on drilling in the highly sensitive Great Australian Bight off the country’s southern coast, which is home to one of the largest breeding populations of endangered southern right whales in the world.

The Australian oil and gas regulator, the National Offshore Petroleum Safety and Environmental Management Authority (NOPSEMA), announced on Friday that it had received a second environment plan submission from BP proposing to drill two exploration wells in the Bight.

The company’s plans have long been opposed by the Wilderness Society. At the time, the Society’s South Australia’s director Peter Owen said: “The Great Australian Bight is a haven for whales, boasting the world’s most significant southern right whale nursery as well as many humpback, sperm, blue and beak whales.”

They were not the only ones criticising BP. The South Australian independent senator Nick Xenophon said the decision by the regulator showed there were “significant and unacceptable risks in the proposal” to drill in what he called “a priceless Australian asset”.

He called the decision to reject BP’s original plans means the project is “hugely complex and risky and needs to have proper oversight and scrutiny.”

Now BP has come back saying it wants to drill reduce the number of exploratory wells from four to two.

In return, NOPSEMA has granted a request from the oil giant for an extension to the timeframe for resubmission of the first environment plan to 31 December 2016.

According to the regulator: “Petroleum activities will not be permitted to proceed in the Great Australian Bight until such time as compliance with all requirements of Commonwealth environmental law has been demonstrated.”

Despite reducing the number of wells it wants to drill, the company’s operations are generating increasing criticism. Back in April, the Australian Senate heard how BP’s planning application was being assessed under a “weak and secretive regulatory regime”.

A recent report by the South Australian planning department  concluded that plans to drill for oil in Bight will significantly increase the risk of oil spills, both from the oil rigs and the increased shipping traffic.

Earlier this month, the Wilderness Society released a map of the Bight (see picture) which pinpoints where BP wants to drill. Peter Owen, from the Society, said BP planned to drill in the Bight’s benthic protection zone.

The organisation’s Australian managing director Jeff Hansen recently said: “Where they want to drill, you can get 20m swells out there. You can imagine trying to clean up a swell in that kind of weather … You could not clean it up, simple as that.”

He added: “We’ll do everything in our power to stop this rig coming south and then look at options if it did head south to slow it down. Losing this one is not an option.”