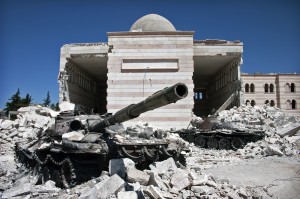 So it’s official. Confirming what many people already suspected, especially in areas of the Middle East or the Horn of Africa, climate change can be a cause of conflict.

Heatwaves, floods and rising temperatures have led to armed conflict in ethnically divided countries, according to new academic research.

This means that war should be added to the long list of problems associated with climate change.

The academics argued: “Recent analyses of the societal consequences of droughts in Syria and Somalia indicate that such climatological events may have already contributed to armed conflict outbreaks or sustained the conflicts in both countries.”

“Similarly, a prolonged drought might have contributed negatively to the ongoing conflicts in Afghanistan. Further destabilisation of Northern Africa and the Levant may have widespread effects by triggering migration flows to neighbouring countries and remote migrant destinations such as the European Union.”

“This debate comes up time and again — is climate change really something like a trigger for violent conflict?” says Hans Joachim Schellnhuber, director of the Potsdam Institute for Climate Impact Research in Germany, a senior author of the new paper. “Some people say yes, others say no. There’s a heated debate about it.”

He added: “Armed conflicts are among the biggest threats to people, killing some and forcing others to leave their home and maybe flee to faraway countries. The combination of climate disasters and ethnic tensions make for an ‘explosive mixture’.”

Dr Jonathan Donges, co-editor of the paper also says: “We’ve been surprised by the extent that results for ethnic fractionalised countries stick out, compared to other country features such as conflict history, poverty, or inequality.”

Donges added: “We think that ethnic divides may serve as a predetermined conflict line when additional stressors like natural disasters kick in, making multi-ethnic countries particularly vulnerable to the effect of such disasters.”

The academics concluded that the research has serious ramifications for the future: “This has important implications for future security policies as several of the world’s most conflict-prone regions, including north and central Africa as well as central Asia, are both exceptionally vulnerable to [manmade] climate change and characterised by deep ethnic divides.”

Climate models also suggest that these areas can expected “a substantial increase in extreme event hazards”.

“Projections of overall conflict risk up to 2050 … find these regions to be particularly endangered, which highlights the relevance of our findings in the wider context of conflict prevention and development,” the paper says.

Finally, Schellnhuber believes that “In 50 years from now, under a business-as-usual scenario, 80-90% of disasters will be driven by climate change. Then the whole thing really explodes.”