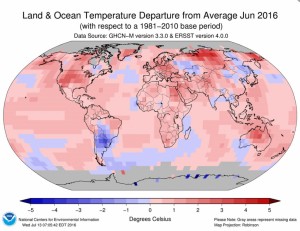 s Washington and London swelter in the mid-Summer heat, it has been confirmed that our record breaking weather continues with June being the hottest ever on record.

According to the two US agencies, NASA and NOAA, June was 0.9C hotter than the average for the 20th Century, and the hottest since records began in 1880. The previous record was last year, which was beaten by 0.02C.

NOAA outlined how “This marks the 14th consecutive month the monthly global temperature record has been broken, the longest such streak in the 137-year record.”

Furthermore, last month was the fortieth June in a row where global ocean temperatures were “at least nominally above the 20th century average”.

Whilst the record breaking weather has coincided with a strong El Niño, this has now receded and yet the records keep on being broken.

NASA’s chief climate scientist Gavin Schmidt said: “While the El Niño event in the tropical Pacific this winter gave a boost to global temperatures from October onwards, it is the underlying trend which is producing these record numbers.”

The record temperatures are especially having an impact on the Arctic, where five of the first six months in 2016 showed the smallest sea ice area since satellite tracking began in 1979.

Nasa’s Walt Meir says: “It has been a record year so far for global temperatures, but the record high temperatures in the Arctic over the past six months have been even more extreme. This warmth as well as unusual weather patterns have led to the record-low sea ice extents so far this year.”

Last week NASA began something called Operation IceBridge which began conducting airborne measurements on deep melting pools in the Arctic to try and better understand how fast the ice is melting.

But it is not just in the Arctic that the effect of climate change is being felt. As any office worker in Washington or London will know in the last few days working in heat can be problematic.

And now researchers believe that increasing temperatures could cost the global economy $2 trillion by 2030, especially through “heat stress”.

New academic research, published in the Asia-Pacific Journal of Public Health, outlines how: “the global economic cost of reduced productivity may be more than US $2 trillion by 2030. The most susceptible jobs include the lowest paid — heavy labour and low-skill agricultural and manufacturing.”

According to author, Tord Kjellstrom of the Health and Environment International Trust, New Zealand: “Current climate conditions in tropical and subtropical parts of the world are already so hot during the hot seasons that occupational health effects occur and work capacity for many people is affected.”

Dr. Kjellstrom added “We must take decisive action now to mitigate emissions of greenhouse gases. Failure will cause the frequency and intensity of disasters to worsen dramatically beyond 2050, and the situation at the end of this century will be especially alarming for the world’s poorest people.”