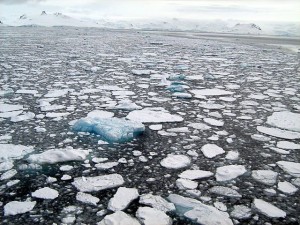 One of the last arguments used to by climate sceptics to try and argue that global warming is not happening has just been debunked by a new scientific study.

Despite the fact that across the globe the effects of a changing climate are being witnessed on a daily basis, no more so than in the Arctic, in recent years some parts of Antarctica have witnessed an increase in sea ice. The sceptics have argued that this growth can only mean that the Earth is not warming.

But now a new scientific study, led by the National Center for Atmospheric Research (NCAR) in Boulder, and published in the journal Nature Geoscience, has concluded that this trend of increasing Antarctic sea ice, which is seemingly at odds with climate model projections, can largely be explained by a natural climate fluctuation.

The scientists argue that what is known as the Interdecadal Pacific Oscillation (IPO) is currently in a “negative phase” which results in cooler-than-average sea surface temperatures in the tropical eastern Pacific, but this then has created favourable conditions for significant additional Antarctic sea ice growth since 2000.

Although satellite records show that Antarctic ice has been slowly increasing since satellite records began in 1979, this increase has been most marked since the Millennium, increasing five-fold between 2000 and 2014, as the IPO moved into a “negative” phased in 1999. Indeed, NASA revealed in September 2014, that Antarctic sea ice had reached a new record of  7.78 million square miles.

The sceptics have always been quick to pounce on the Antarctic ice gain.

But now, as the IPO switches back to a “positive” rather than “negative” phase, Antarctic sea ice may begin to shrink.

As the IPO transitions to a “negative” phase, which the scientists believe begun to happen in 2014, the sea surface temperatures in the tropical eastern Pacific will cool, which in turn will change tropical precipitation, which drives large-scale changes to the winds that extend all the way down to Antarctica.

“The climate we experience during any given decade is some combination of naturally occurring variability and the planet’s response to increasing greenhouse gases,” says NCAR scientist Gerald Meehl, lead author of the study. “It’s never all one or the other, but the combination, that is important to understand.”

“As the IPO transitions to positive, the increase of Antarctic sea ice extent should slow and perhaps start to show signs of retreat when averaged over the next 10 years or so,” Meehl adds.

Cecilia Bitz, from the University of Washington, and a co-author of the study, also contends that: “Compared to the Arctic, global warming causes only weak Antarctic sea ice loss, which is why the IPO can have such a striking effect in the Antarctic. There is no comparable natural variability in the Arctic that competes with global warming.”