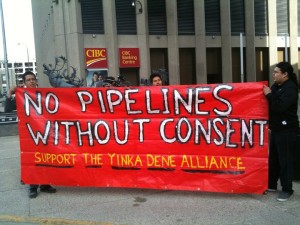 In a stunning victory for First Nations and environmentalists, a Canadian court has overturned the approval of the highly controversial Northern Gateway pipeline in Canada.

The country’s Federal Court of Appeal ruled yesterday in a 2-to-1 decision that the government had failed to adequately consult with First Nations over the pipeline, which will severely impact their way of life.

The proposed $7.9 billion Enbridge Northern Gateway pipeline, if built, would transport the dirty tar sands fuel from Alberta to an export terminal on the west coast of British Columbia. The cultural and ecological impact of the pipeline would be huge.

Oil tankers would have to navigate what are seen as treacherous waters. The pipeline itself crosses the Great Bear rainforest and would have run down the Skeena River, the major salmon river of northwest British Columbia.

The Court’s decision effectively “shuts the door” on the pipeline ever being built, argue its critics. It also blocks yet another potential route for the tar sands to get to market. Indeed, the tar sands industry is rapidly running out of options to get its dirty fuel to the consumer.

In its 153-page judgment, the court argued that consultation with First Nations by the previous Stephen Harper Government was “brief, hurried and inadequate” even though it would have been easy for the two sides to have a meaningful dialogue.

The damning judgement said: “Canada failed to make reasonable efforts to inform and consult. It fell well short of the mark.”

It continued: “Missing was a real and sustained effort to pursue meaningful two-way dialogue. Missing was someone from Canada’s side empowered to do more than take notes, someone able to respond meaningfully at some point.”

“The inadequacies — more than just a handful and more than mere imperfections — left entire subjects of central interest to the affected First Nations, sometimes subjects affecting their subsistence and well-being, entirely ignored,” wrote the court.. “Many impacts of the project were left undisclosed, undiscussed and unconsidered.”

Trudeau’s cabinet will now have to decide what to do. At least they will have to undertake an adequate consultation exercise before a new permit can be issued. However, Canada’s new Prime Minister said he was opposed to the pipeline back in April, and whether his Government sides with First Nations or the powerful tar sands lobby will be seen as a critical test of his leadership on both sides of the debate.

Meanwhile First Nations and environmentalists reacted positively to the news:

“At every turn you’re going, you are seeing nails in the coffin of the Enbridge project,” said Peter Lantin, president of the council of the Haida Nation. “I don’t think there’s enough room for another nail in the coffin.”

“Everybody is pretty happy – it’s wonderful result,” said Art Sterritt, an elder with the Gitga’at First Nation. “There is really no good that can come of the Northern Gateway project. … Just one spill from this project basically wipes out our rights to harvest, wipes out our access to our food, wipes out our economy, wipes out our culture.”

Sven Biggs, a representative of one of the environmental groups in the lawsuit, said: “ “Today’s ruling shows what the people have been saying all along – this pipeline will never be built. This is a victory,”

Jessica Clogg, senior counsel with Vancouver-based West Coast Environmental Law, added: “This ruling provides an important opportunity for Prime Minister (Justin) Trudeau to do the right thing and put an end to the project for good, by implementing a ban on oil tankers on the north coast of British Columbia.”

However Enbridge said it remains “fully committed” to building the pipeline.