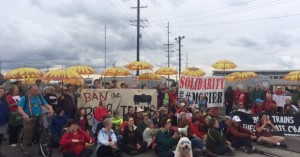 Just as the political opposition to crude by rail trains is growing in the US over the latest crash along the Colombia River Gorge, so is the public opposition.

Over the weekend in excess of 100 protesters, from young and old, blocked a crude by rail train on tracks in Vancouver, in Washington state.

The city is on the north banks of the river and is where a $200 million oil terminal is due to be built. The blockade lasted three hours and delayed the movement of five trains.

A spokesperson for the protest from the newly formed Fossil Fuel Resistance Network, Jessie Braverman, said it was a direct response to the to the June 3 derailment of a Union Pacific train that spilled 42,000 gallons of crude in the Columbia River Gorge. For more see here and here.

The Resistance Network is “dedicated to ending fossil fuel extraction and transportation, defending the Pacific Northwest from extractive industries, and promoting a just transition to sustainable energy sources.”

Some twenty one were arrested, including an eighty-five year old woman.

The protest centred on the BNSF Railway and Amtrak Station, where protestors sat on the tracks with signs saying “ban the bomb trains” and “I stand against oil trains”.

They sat in a circle, under umbrellas decorated with sun-flowers and sang: “Want to know what all the fuss is? Rising up for climate justice.”

Soon the Police arrived and the protesters were told that if they refused to move they would be arrested “for criminal trespass”.

But many refused to budge, leading to the arrests.

One of those protesting was Mike Matheny, from Portland, with his two young children. “[My children] will realize the consequences of inaction or not making changes…and so the urgency of giving them some exposure to the sense of public voice, the sense of community … is very important to me,” he said.

Beside him his young daughter stood on tiptoes whilst holding her banner.

Another person there with his family was Julian Voss-Andreae, an artist living in Portland. “We have been involved in a fossil fuel system that is clearly and completely unsustainable,” he said, before adding “There will be no change if people don’t start standing up. It’s just absolutely essential to do this, even though it’s not fun.”

During the blockage the train company brought the train to within fifty feet of the protesters and then noisily blasted its horn, leading to one activist Mia Reback, to remark “BNSF bringing a train this close to protesters further shows they do not care about the health and safety of community members”.

BNSF spokesperson Gus Melonas reacted angrily to the protest. “Its disruptive. It’s costly. These trains carry millions of dollars’ worth of merchandise. We can’t tolerate these blockades. We asked that they moved their protest off site. If not, action will be taken.”