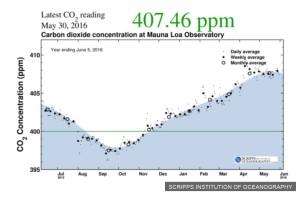 Atmospheric concentrations of CO2 will shatter the critically important barrier of 400 ppm this year and are now not predicted to fall below that level again in our life-times.

The level was reached a whole year before scientists had predicted.

According to a new scientific study, published in Nature Climate Change, CO2 measurements at the iconic Mauna Loa observatory in Hawaii, have increased by an astonishing 3.1ppm this year, way over the average of 2.1ppm.

The Hawaiian observatory is seen as the gold standard place for measuring CO2 and has the longest records, dating back to the late fifties. As we surge past 400 ppm it is worth remembering that pre-industrial levels were 280 ppm.

The last time CO2 was regularly above 400ppm was three to five million years ago.

Two days ago, concentrations were at 407.26 parts per million, according to NOAA’s Earth System Research Laboratory. Even though the level will decrease slightly later this year, the scientists are now predicting that levels will never again go below 400ppm.

We have permanently crossed a symbolic threshold.

The recent surge is in part due to the effects of this year’s strong El Niño but also driven by the fact that manmade emissions continue to increase.

“Our forecast supports the suggestion that the Mauna Loa record will never again show CO2 concentrations below the symbolic 400 ppm within our lifetimes,” the scientists write.

Professor Richard Betts of the Met’s Hadley Centre and Exeter University, and lead author of the paper said: “Once you have passed that barrier, it takes a long time for CO2 to be removed from the atmosphere by natural processes.”

He added: “Even if we cut emissions, we wouldn’t see concentrations coming down for a long time, so we have said goodbye to measurements below 400ppm at Mauna Loa.”

Betts argues that radical action is needed now to avoid 450 ppm, the limit the IPCC says we need to avoid to stay below 2 degrees warming.

“We could be passing above 450ppm in roughly 20 years,” Betts said. “If we start to reduce our global emissions now, we could delay that moment but it is still looking like a challenge to stay below 450ppm. If we carry on as we are going, we could pass 450ppm even sooner than 20 years, according to the IPCC scenarios.”

Another scientist who worked on the paper is the son of Charles Keeling, the person who started taking CO2 measurements back in the late fifties in Hawaii, and whose name gave rise to what is known as the Keeling Curve.

Keeling’s son, Ralph said in statement: “Back in September last year, we suspected that we were measuring CO2 concentrations below 400 ppm for the last time. Now it is looking like this was indeed the case.”