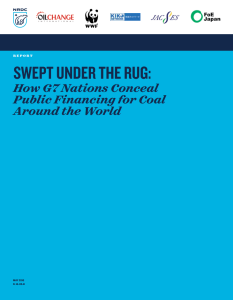 In December 2015, more than 190 nations met in Paris for the 21st Conference of the Parties to the United Nations Framework Convention on Climate Change (COP21). The conference produced the Paris Agreement, with countries committing to limit the average global temperature rise to 2 degrees Celsius, and to make best efforts to limit the increase to 1.5 degrees. Unfortunately, continued government financing for international coal projects undermines the Paris Agreement. Coal accounts for two-fifths of global energy-related carbon emissions—more than the contributions from oil or gas. Governments must limit future fossil fuel projects, beginning with coal, in order to address climate change.

In providing public finance for coal projects, Japan ranks as the worst offender among the G7 nations for supporting more than $22 billion in overseas coal projects from 2007-2015, and for plans to finance another $10 billion in future coal projects. Other G7 nations also financed coal development between 2007-2015: Germany provided $9 billion; the United States, about $5 billion; France, $2.5 billion; Italy, $2 billion; United Kingdom, $1 billion; and Canada, less than $1 billion.

Several multilateral banks and the export credit agencies for countries in the Organisation for Economic Co-operation and Development (OECD) have pledged to restrict funding for coal plants and other, related activities. Even so, new publicly funded coal projects still loom on the horizon. These funding mechanisms unfairly favor the use of coal over clean energy and impede the transition to a low-carbon economy. Given the grave climate risks and health impacts linked to coal use, it is time to end financing for coal projects.

Note: this report follows a report titled “Under the Rug,” published by Oil Change International and partners in 2015.