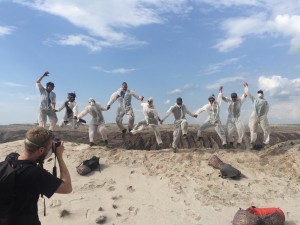 Over the last two weeks, in excess of 30,000 people have undertaken 20 hugely significant acts of civil disobedience on six continents as part of the #Breakfree2016 protests against fossil fuels.

It has been unprecedented protest on a global scale. In fact we have just witnessed the largest civil disobedieance in the history of the environmental movement.

Over the weekend the two weeks of protests, marches, banner hangs, flotillas, blockades and other direct action reached a stunning climax:

There were a myriad of protests across the globe, including in Brazil protesting against the country’s largest coal plant; in Indonesia, activists stopped coal import terminal operation for 12 hours yesterday: in Turkey, thousands marched to blockade a coal waste dump zone in Aliaga; in Ecuador activists planted trees at the future site of an oil refinery to protest against oil drilling in the Yasuni National Park and in Nigeria activists demanded a cleanup of the highly polluted Niger Delta. 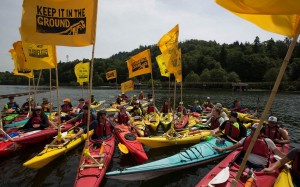 In the US, there were protests against the biggest unmitigated carbon polluters in Pacific Northwest; as well as protests and marches in Washington and LA. Crude by rail trains on both coasts of were targeted. In Colorado activists protested against fracking.

In the Pacific North West kayaktivists took to Fidalgo Bay to protest against oil refineries there. There were more than a thousand protesters.

One of the biggest protests was in Europe, where 4000 people shut down one of Europe’s biggest opencast coal mines for some sixty hours in Germany. “We are here to stop the coal trains going along the tracks”, said one protestor. “We believe in climate justice”. 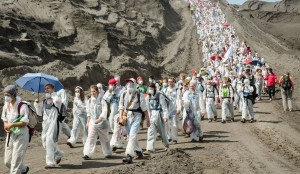 Hannah Eichberger, a spokeswoman for the Ende Gelände environmental group added: “Germany is the world leader in burning dirty coal. Therefore we are taking the exit from coal into our own hands and closing down one of the largest climate killers in Europe.”

As the protestors shut down the massive coal plant in Germany, ironically it was the first time ever that the country generated all its electricity from renewables for just for a few hours.

The country has been getting close to the landmark for a while. The weekend before, 95 percent of Germany’s power had been produced from renewables.

The UK is also breaking its grip on the dirty fossil fuel faster than anyone predicted. Last week was the first time since the Industrial revolution that the UK produced electricity without any coal.

As the Financial Times reports this morning, the milestone was actually past seven times last week. “ From Monday May 9 to the following Sunday lunchtime, the UK was at “zero coal” almost one-third of the time,” reports the paper.

Simon Evans, policy editor of the Carbon Brief website, told the FT: “This is not the end for UK coal power, but it is a significant moment. The UK was the first country to build a public coal-fired power station. Now it is going to be one of the first to close them all down.”

Dave Jones, an analyst at Sandbag, the climate change think-tank, added: “Having zero coal in the UK is a historic moment in the transition to clean electricity. The fall has come quickly — as recently as 2012, 40 per cent of electricity came from coal.”

For many, the demise of coal cannot come soon enough.