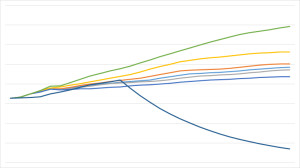 The Energy Information Administration should help, not hinder, policymaking on the energy transition

If you don’t ask, you don’t get. So while the Obama Administration has joined 175 other countries in signing the Paris Agreement to keep global warming well below 2°C, and ideally below 1.5°C, it has yet to find a way to bring all elements of the federal government into line. And without such unity, there’s a limited chance of getting there.

That’s why it’s a problem that all the scenarios in the Energy Information Administration (EIA) new International Energy Outlook (IEO) forecast climate disaster. Nowhere does the EIA map out what energy systems should look like if the goal of keeping climate change from going out of control is to be achieved – a pretty remarkable omission for the US Government’s official energy adviser. This is especially so when the government’s official policy is to meet climate goals through a specific emissions reduction target – 83% of 2005 levels by 2050. In short, the EIA isn’t doing its job.

On Wednesday, the EIA released the latest IEO, forecasting a rise in global energy-related CO2 emissions from 32 billion tons in 2012 to 43 billion in 2040 – moving in precisely the wrong direction. According to the Outlook, fossil fuels will continue to account for 78% of world energy in 2040, with use of all three increasing in absolute terms over current levels. By comparison with scenarios from the International Energy Agency’s Energy Technology Pathways {$} project, we estimate that the EIA’s reference case would be on course for more than 4°C of warming (see chart). 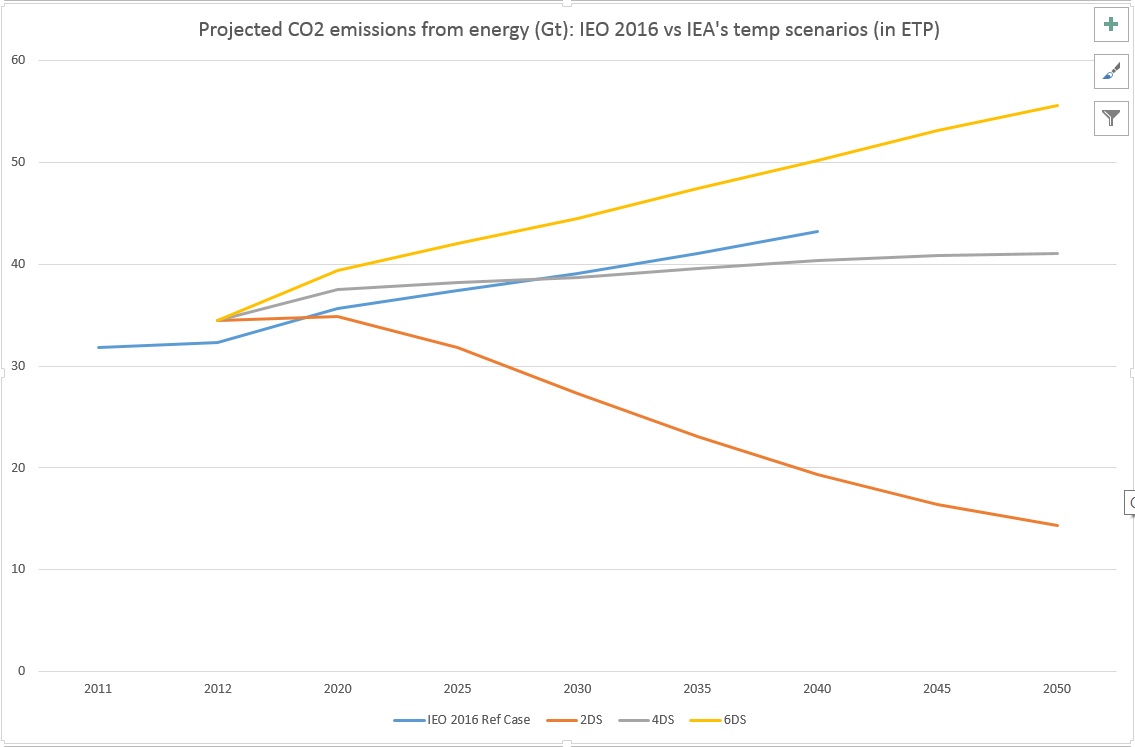 Oil Change International is one of 16 organizations across North America calling on governments to apply a climate test to decisions on new energy infrastructure or policy. That means that if a pipeline or coal mine, for instance, is not consistent with staying within agreed climate limits, it should not be approved. The first step in such a test is to evaluate what staying within the limits would look like for energy systems.

Alongside its central Reference Case, the International Energy Outlook considers alternative scenarios where oil price is higher or lower, or economic growth is higher or lower. But it does not consider any scenario where climate catastrophe is avoided.

The EIA claims it is limited in what assumptions it can make about future policies. It says that it must steer away from “politics” and thus not only ignores long-term policy in its reference case, but fails to consider any scenarios that reflect it.

But that approach is in itself a hotly political one, as it implicitly denies the possibility of climate action, which is all the more extreme when the consequences of the futures it describes are truly considered. Presenting data that shows fossil fuel energy usage continuing to rise for decades on end suggests a world basically unfit for human habitation. Yet the EIA chooses to present that data without any context of its implications, or any suggestion that the world will actually rise up to meet the goals it has set forth to limit the climate crisis. Ignoring the consequences of climate inaction is a political choice.

When EIA chief Adam Sieminski was asked at the launch whether the Paris Agreement was factored into the Outlook, he said it was “complicated”, and countries’ pledges (INDCs) were included only when they had already been translated into law and regulation. There is no consideration of the long-term Paris temperature goal. He explained, “You have a reference case; it’s existing law and regulation or something as close as you can get to that on an international basis and then you run those numbers and then you use that to test… That is hugely valuable to policy makers and to the public to understand what doing things, changing assumptions does to the numbers…”

He’s missing the point. The EIA’s projections are routinely used by other government agencies to justify projects, on grounds that projected energy demand shows a need for the energy delivered by a proposed project. For example, the Bureau of Ocean Energy Management (BOEM) recently used the EIA’s Reference Case to come to the remarkable conclusion that increased drilling in the Outer Continental Shelf (OCS) would actually reduce emissions. They conclude this because the EIA Reference Case assumes US demand stays more or less at today’s levels and therefore oil would have to be imported from elsewhere at a slightly higher emissions cost, if it is not supplied from the OCS.

In our critique of BOEM’s analysis, we point out that assessing the climate impact of a decision using an energy scenario in which climate goals are totally overshot is setting the nation up for failure.

“By using an energy forecast scenario that results in climate disaster, the BOEM analysis fails to actually assess the impact of increased drilling on the climate, which is surely the point of calculating GHGs in the first place. This is because in the scenario BOEM is using, the destruction of the climate has already been written into the model.”

In other words, there is a real danger of EIA projections becoming a self-fulfilling prophecy.

Even as a piece of dispassionate analysis, the International Energy Outlook is not very plausible. The EIA’s projections on renewable energy growth have been consistently wrong, and widely criticized (eg here {$}, here, here and here) – to the extent that in March, it published a partial mea culpa, to try and explain its forecasting failures. Yet the experience appears not to have tempered the EIA’s pessimism about renewables. For example, the new International Energy Outlook projects an immediate slowdown in solar generating capacity growth after 2015 (see chart). 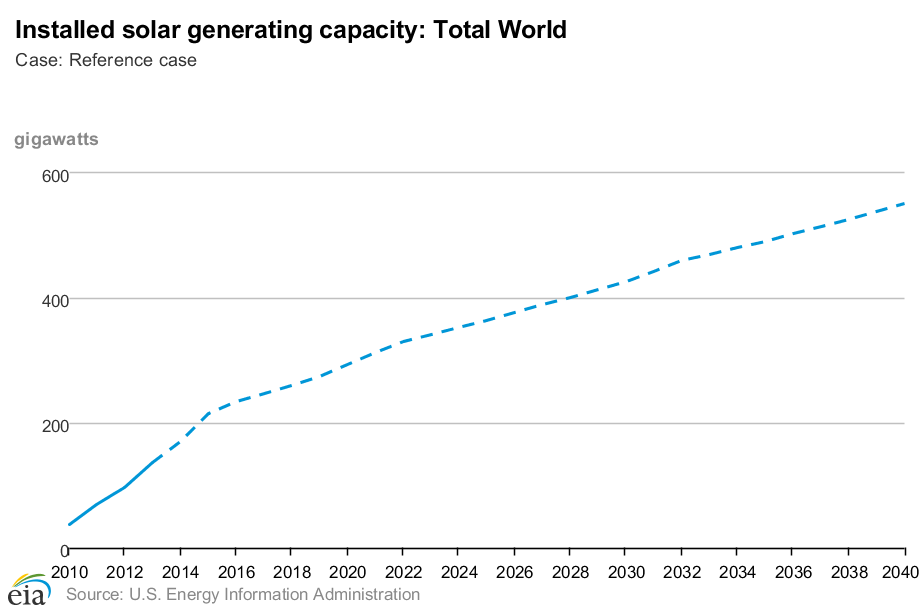 The EIA is failing to provide quality information to “inform sound policy making”. President Obama should order it to provide genuine advice and analysis to inform the energy transition necessary to live up to the climate objectives his administration has already committed to.

That would require modeling the US climate goal to cut emissions 83% from 2005 levels by 2050 and providing it as an alternative case in every Outlook publication.