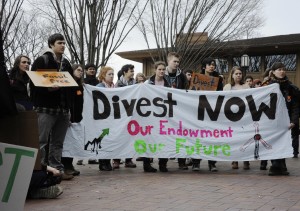 As the fossil fuel disinvestment movement gathers a pace, the loses of US oil companies have reached record levels.

“We are right in the middle of a transition – not to try to curb the burning of the fuels, but to end the fossil fuel industry altogether. The industry will be one for the history books, much like slavery.”

Some 500 organisations, with a combined wealth of more than $3.4 trillion, have already pledged to divest from fossil fuels and invest in climate solutions.

The conference had been opened by Sarah Butler-Sloss, founder director of the Ashden Trust, who said simply: “We are not making a sacrifice. We have gained money from not investing in fossil fuels.”

Whereas others continue to lose money from their investments. There is more bad news for the US oil industry this week. The top forty publicly traded oil and gas companies lost a combined $67 billion last year due to the oil price plunge.

As CNN reports the “analysis also revealed that the companies most vulnerable to losses were oil producers with too much debt taken on during the boom years.”

Last month SandRidge, which has debts of $3.6 billion, warned there was “substantial doubt” it would survive the oil downturn and was exploring Chapter 11 bankruptcy filing.

Hindsight can be a wonderful thing, but it can also expose brutal flaws: SandRidge “borrowed money with $100 oil and they have to repay it with $40 oil. That equation doesn’t really work,” says Buddy Clark, an energy finance expert at Haynes and Boone.

If SandRidge goes bankrupt, it will be the largest North American oil-focused company to go bust since the current crisis began.

And that is totally unsustainable.

“It seems those companies that were most highly leveraged were also the ones taking the riskiest bets. That’s what has come back to hurt them the most,” argues Matt Smith, director of commodity research at ClipperData.

And it is not just in North America that the oil industry is struggling over debt payments.

Earlier this week, the Financial Times reported how “the slowdown in both exploration for new fields and the development of past discoveries is causing particular difficulties for those rig operators that are heavily indebted.”

The problems have spread offshore too.

One company that operates offshore rigs on behalf of oil producers, Seadrill, had a net debt that was 4.7 times its earnings before interest, tax, depreciation and amortisation in 2013. By the end of last year its leverage had increased to 5.4 times.

Those wanting to lend money want certainty over their investment, whereas the current chaos with the oil price volatility means certainty is impossible. Amrita Sen from  Energy Aspects, a consultancy, says: “The problem is not just that oil is at $45. It’s that you just can’t be certain of anything.”

In the UK, banks are seeking to offload risky loans made to North Sea explorers. They have had enough. “I think we’ve got to a stage where a number of the banks just want out – and they are prepared to sell,” argues Simon Tysoe, a partner at the international law firm, Latham and Watkins.

Maybe they should have listened to the advice of Sarah Butler-Sloss at the disinvestment conference in Oxford sooner: “We are not making a sacrifice. We have gained money from not investing in fossil fuels.”