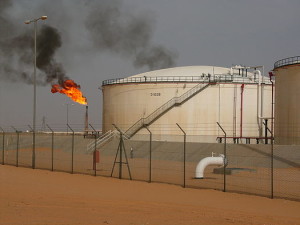 If you read the news yesterday you would be forgiven for missing something momentous.

When the definitive book about the oil age is finally written, yesterday will be marked as significant.

Saudi Arabia, for decades the biggest oil producer on the planet, talked about an economic shift to end its “addiction to oil”.

After decades of making billions of oil, of being the dominant force in the OPEC oil cartel, of having the largest oil reserves, the Kingdom has unveiled an ambitious package to diversify beyond oil.

The announcement is another key sign that the hydrocarbon age may well and truly be beginning to come to an end.

In part this is due to the fact that the Kingdom, which has been locked in a war with US shale producers which has seen the price of oil plummet, is feeling the pain of price volatility.

Spurred on by the collapse in the global oil price, one of the Kingdom’s highly influential deputy crown Prince’s, Mohammed bin Salman, who is seen as a key moderniser and is the “favoured” son of the King, outlined plans for the country to become a global investment power at a press conference with foreign journalists.

“We will not allow our country ever to be at the mercy of commodity price volatility or external markets,” bin Salman said.

Outlining his “Vision 1020”, bin Salman said the Kingdom would end its reliance on oil within four years.

“We have an addiction to oil,” outlined bin Salman, who is now seen as one of the Kingdom’s key decision makers. “This is dangerous … it has delayed the development of other sectors.”

However, the challenge could hardly be greater. Currently 90 per cent of the Kingdom’s revenue comes from oil.

Central to the plan is to float a 5 per cent stake in the state owned oil company, Aramco, which would value the oil giant at between $2 and $3 trillion at the same time making it more autonomous from Government. Just selling a one per cent stake would create the biggest public offering in history, so 5 per cent is huge.

The shares sold in Aramco will then be used to create a sovereign wealth fund.

“The vision is a road map of our development and economic goals,” the Prince said. “Without a doubt Aramco is one of the main keys of this vision and the kingdom’s economic renaissance.”

Meanwhile Aramco would become more transparent and diversified. “After the IPO, the Aramco board can take its own decisions,” said the Prince.

It remains to be seen whether the Prince’s bold plan becomes a reality, but after making remarks like these, it will be difficult to stop the winds of change that are now seem to be blowing in Arabia.