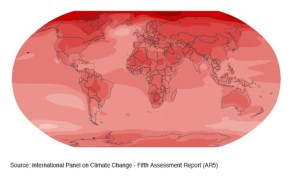 History will be made today at a ceremony in New York when countries start to formally sign the Paris climate agreement, which was initially approved in December last year.

The Paris accord agrees to keep global temperatures “well below” 2C and “to pursue efforts to limit the temperature increase to 1.5C above pre-industrial levels”.

Timed to coincide with Earth Day, today’s ceremony will be the biggest signing of an agreement in history.

The climate agreement needs 55 countries – representing 55 per cent of emissions – to ratify it before it comes into effect. For many countries a signature is not enough, individual parliaments back home have to vote for it too.

This said, there is real momentum already with some 60 world leaders having gathered in New York for the ceremony, including French President Francois Hollande and Prime Minister Trudeau from Canada. UN Secretary General Ban Ki-moon, will also be present. President Obama, however, will not be there.

In total some 155 countries are expected to eventually sign. Although the deadline is 2020, world leaders are hoping most countries sign up and have finished the ratification process long before then. Some say the agreement will be operational before the end of the year.

As the Independent puts it “But even if countries manage to bring the agreement into effect soon, it may not be enough. Scientists say that the measures in the document might not be enough to keep temperatures below the 2 degrees Celsius limit that, if breached, could cause huge damage across the world.”

John Sterman, of the Massachusetts Institute of Technology tells the Independent: Even “if the Paris pledges are implemented in full, they are not enough to get us even close to a 2-degree pathway. I don’t think people understand how urgent it is.”

There is increasing evidence that the politics is not keeping up with the world’s rapidly changing climate: As Chris Mooney and Brady Dennis report in the Washington Post, there is a “grim drumbeat” behind today’s agreement:

They write: “The first three months of 2016 have been the hottest ever recorded, and by a large margin. Greenland’s massive ice sheet melted more this spring than researchers have ever seen. Warming seas are turning once-majestic coral reefs into ghostly underwater graveyards. And scientists are warning that sea levels could rise far faster than anyone expected by the end of the century, with severe impacts for coastal communities around the globe.”

And the warnings keep on coming. Just this month the National Oceanic and Atmospheric Administration warned that sea levels could rise by roughly 3 meters or 9 feet by 2050-2060, which is much worse than current projections.

Margaret Davidson, NOAA’s senior advisor for coastal inundation and resilience science and services told an insurance conference:  “The latest field data out of West Antarctic is kind of an OMG thing.”

Every day we get new warnings too from the Great Barrier Reef, with latest estimates that some 93 per cent is bleached due to rising water tempteratures caused by climate change and El Nino.

So even with today’s signing ceremony, the big unknown is whether the UN climate talks will deliver the necessary carbon cuts to avoid catastrophic warming. Many people remain sceptical that it will.

“Estimates suggest that the gap between where emissions will be and where they need to be, will be around 11 gigatonnes of carbon dioxide in 2025. That’s more than the annual emissions of China,” says Shane Tomlinson, a senior research fellow at Chatham House.

Tom Goldtooth, of the Indigenous Environmental Network, argues: “I started attending the UN climate meetings in 1999. Over the last 17 years I’ve witnessed corporate, Wall Street and other financial influence gut any real solutions coming out of the negotiations”.

Goldtooth adds: “As a result, the Paris Agreement goal of stopping global temperature rise by 1.5 degrees C is not real because the pledges each country is making will allow emission levels that will increase global temperature 3 – 4 degrees. This will be catastrophic to the ecosystem of the world.”