Nobel Peace Laureates have added their voices to the call to permanently protect the Arctic from oil and gas exploration and production. In a letter sent today to members of the Arctic Council, the signatories point out that, “nations who share borders in this remarkable region also share an obligation to protect it…both by tackling your nation’s emissions and by keeping the Arctic off-limits to more high risk, high cost fossil fuel development.”

The letter comes as members of the Council prepare for a high level meeting in Fairbanks, Alaska, beginning tomorrow. It also comes in advance of the imminent release of the Obama Administration’s draft five year offshore drilling plan, which will be a litmus test for the President’s recent promise to align climate science and Arctic protection. 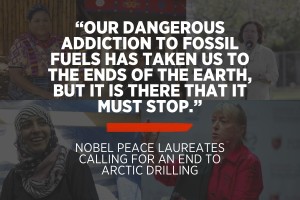 Just last week, in a joint statement with Canadian Prime Minister Justin Trudeau, the President promised that, “commercial activities will occur only when the highest safety and environmental standards are met, including national and global climate and environmental goals and Indigenous rights and agreement.” And as we have shown, Arctic fossil fuels have zero space in the climate safe world that the Obama Administration, and almost all other governments, committed to in Paris.

The Laureates bring a critical perspective to the conversation, one that puts the moral imperative for action front and center. With hundreds of thousands of lives and livelihoods around the world already being impacted by the changing climate, a failure to urgently tackle the problem by leaving carbon in the ground is one of the “greatest threats to global peace and stability”, reads the letter — it is “a critical issue of human rights, justice, and equity.”

The best available science shows that for a reasonable chance at limiting global warming to 2 degrees Celsius or less, the vast majority of fossil fuels that we already have access to must stay in the ground. Limiting warming to 1.5 degrees will mean significantly more ambition. New exploration is nothing short of a hunt for unburnable carbon – bound to become stranded assets as the world tackles climate change. 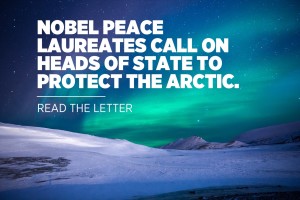 The letter states that the Council has the opportunity to be a “model of the international cooperation that will be needed as we collectively phase out fossil fuels and transition the world to cleaner, more sustainable sources of energy.” And with the U.S. as the current chair of the council, they can inspire and drive this leadership by ensuring the Arctic is permanently off limits to fossil fuel exploration and production in the forthcoming five-year plan.

2015 was an important year for the climate. From oil giant Shell withdrawing from the U.S. Arctic ocean, to the President’s rejection of the Keystone XL tar sands pipeline, to the Paris climate agreement – the tides are clearly turning. Let’s ensure 2016 takes us even further, faster, towards the safe climate future the world needs. We can start by putting an end once and for all to the desperate hunt for unburnable carbon at the ends of the earth.

Read the full letter here and the press release here.