This Thursday, President Obama will host Canadian Prime Minister Trudeau at a state dinner – the first such official dinner between the two nation’s leaders in almost two decades. The event signals not only a new relationship between the two neighbours (at least for a while longer), but also a shared set of values that are finally cross-border priorities: climate change and the environment, which are expected to be front and centre on meeting agendas.

Tackling climate change has been a pillar of both leader’s politics, and while Obama has a few more years at the helm under his belt, Trudeau appears committed to delivering on campaign promises for a national climate plan and working to rewrite Canada’s legacy as a climate laggard over the past decade. 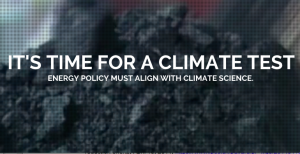 It makes perfect sense for the two countries to collaborate on climate action – given our extensive bilateral connections, hashing out joint plans and programs that work on both sides of the border will make it easier for everyone. Of course, this approach only makes sense when there is appetite for action, it needs to serve to raise ambition, not settle on the lowest common denominator.

There is undoubtedly a laundry list of issues, potential announcements, and joint statements being negotiated and finalized. But there’s one principle both leaders should agree to in order to set the direction for a climate safe future: The Climate Test.

A couple of weeks ago, along with allies on both sides of the border, we called on President Obama and Prime Minister Trudeau to use the occasion to announce a Climate Test. Such a test, if done right, would put forward a consistent policy to measure new energy projects on the basis of their role and impact in a climate safe future. And in fact, it is an idea rooted in President Obama’s famous Georgetown climate speech in 2013 (which he effectively applied to reject Keystone XL), and one that Prime Minister Trudeau himself has identified the need for (without much detail thus far).

The need for such a science-based test was made explicitly clear just last week as Trudeau met with the leaders of Canadian provinces to forge a path forward for a national climate plan. While the meeting did produce a proposed framework and steps forward, it also highlighted a gross inconsistency in how the Prime Minister is viewing Canada’s climate and energy future.

In a speech opening a leadership summit on climate change and business, Prime Minister Trudeau made it clear that he believes new pipelines and fossil fuel infrastructure are needed to fund the transition to a clean energy future. Not only is this deeply hypocritical, but it also exposes an inherent misunderstanding of Canada’s oil resources that must be countered.

The tar sands are the third largest oil reserves in the world, and unlike most conventional oil, the mines and infrastructure built to extract and produce them lasts for decades. Any major new infrastructure built now will do the opposite of support a transition to cleaner energy, it will lock-in decades more pollution from carbon we cannot afford to burn. It would make the transition significantly harder.

A robust climate test would make this dissonance impossible to ignore. The crux of the climate test is using our actual climate goals (limiting global warming to 1.5 degrees C) to define the types of infrastructure that are going to be economically viable, necessary, and appropriate over the coming decades in the safe climate future we are committed to. Currently, projects are assessed using a scenario that assumes upwards of 6 degrees C of global warming. In short, we’re calling on our leaders to plan for success in achieving our climate objectives when considering the viability and appropriateness of new energy projects.

By aligning our climate, energy, and economic policy, it would become indisputably clear that locking in new infrastructure to support expansion of carbon-based resources such as the tar sands simply can’t work. And not just for the environment and the climate, but for the economy. Saddling Canada to even more dependency on a boom and bust sector that has a diminishing role in a climate-safe future by building new pipelines is poor long term economic thinking and does little more than tee up a case study for stranded assets and lost capital.

President Obama and Prime Minister Trudeau could show unprecedented leadership on climate this week, and set the bar for bilateral action in a post-Paris world that recognizes the beginning of the end of the fossil fuel era.

So bring on the rich discussions about cross-border diversification, innovative clean energy and efficiency solutions, regulations on key greenhouse gasses like methane, and opening more space for exciting developments in electrification! But don’t leave out the critical other side of the coin: putting an end to new fossil fuel projects that we cannot afford, by putting in place a climate test that bets on a safe climate future rather than pitting us against it.