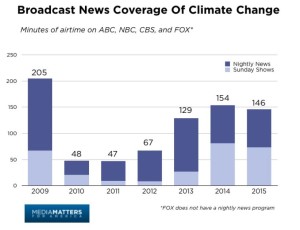 Nearly every day another record is smashed regarding climate change. But as temperatures soar and the crisis becomes more urgent, the less you are likely to hear about it on the major American TV networks, as the coverage of climate change has found to be decreasing.

Last year global average CO2 concentrations recorded their biggest annual jump on record, up over 3 parts per million. At the end of 2015, the temperatures at the North Pole were 30C to 35C above average.

This year has started as madly. According to NOAA, global CO2 levels in January were past the highly symbolic mark of 400 ppm at 402.6 ppm, up from 399.3 ppm the year before.

January this year was officially the most abnormally hot in history.

Initial satellite measurements for February recorded temperatures about 1.15C and 1.4C above pre-industrial levels. “Even the lower part of that range is extraordinary,” Will Steffen, an Emeritus Professor of Climate Science at Australian National University told the Guardian.

Last week, meteorologist Eric Holthaus, reported that “it appears that average temperatures across the Northern Hemisphere have breached the 2 degrees Celsius above ‘normal’ mark for the first time in recorded history, and likely the first time since human civilization began thousands of years ago.”

The records keep on tumbling. This week, Holthaus confirmed that “we just finished America’s warmest winter in history”.

But ironically, just as the climate crisis gets worse, the main American TV networks are reducing the amount of time they spend covering climate change.

A report, published this week, by Media Matters America, revealed that last year that combined climate change coverage by ABC, CBS, NBC, and Fox decreased by five percent from 2014 to 2015. This is despite the fact that the networks planned to increase their coverage. 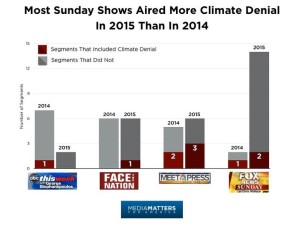 In 2015, climate-related issues took up just 146 minutes total of the network’s evening and Sunday news shows.

And the coverage is getting more misleading.

Media Matters reports that when “the networks did discuss climate change, they rarely addressed its impacts on national security, the economy, or public health, yet most still found time to provide a forum for climate science denial.”

Really worrying, they found that “most Sunday shows aired more climate denial in 2015 than in 2014”.