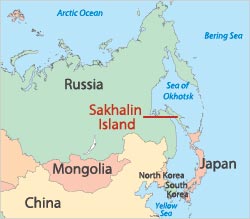 The leading Russian oil company, Rosneft, is currently under investigation by the Prosecutor’s Office on the Russian island of Sakhalin for a large oil spill which occurred last week.

There are differing reports as to how much oil was spilled – with between one and two thousand barrels of oil having poured from a pipeline on the island’s Ekhabi oilfield.

Sakhalin is in the North Pacific Ocean and is Russia’s largest island lying close to Japan. The island has a long controversial history of oil exploration which has been developed since the 1940s. Once such project is Shell’s highly contentious Sakhalin 2 project, where the oil giant was forced to hand over its controlling stake a decade ago.

Although Rosneft argued that last week’s spill had been contained, local environmentalists warned that some oil had reached local rivers.

One local activist, Dmitry Lisitsin, witnessed the authorities burning off the oil. “They started to burn the spilled oil, people see massive plumes of black smoke,” he told local media. Lisitsin said that “According to our information, part of oil made it to the river.”

Greenpeace also said that the spill was a worrying sign of rusting and ageing infrastructure, which the oil companies such as Rosneft have little incentive to look after, especially given the low oil price.

“This is a large spill, and the problem is of a systemic nature,” Vladimir Chuprov, head of energy projects at Greenpeace told Reuters.

“It would cost Russian oil companies as little as 10 percent of their net profit to repair all oil pipelines in this country and prevent further leaks,” he added. “It’s the same amount of money they would have spent on penalties and damage compensation if Russian government had earnest control over oil spills.”

Greenpeace argues that due to dilapidated pipelines, the Russian oil industry spills around 30 million barrels of oil a year – this is 7 times higher than the emount spilled juring BP’s Deepwater Horizon spill in 2010 in the Gulf of Mexico.

Crippled by the low oil price, the Kremlin has been reviewing privatization options, one of which is privatising Rosneft, which the authorities believe will bring in about $6.5 billion.

But any buyer would inherit thousands of kilometres of ageing pipeline infrastructure, much of which is in fragile and inhospitable environments such as the Russian Arctic.