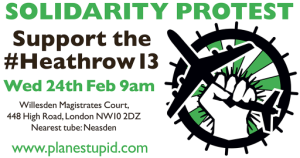 At 9 AM tomorrow GMT, thirteen climate change activists will appear in court for sentencing for undertaking a non-violent protest in July last year at Heathrow against airport expansion.

The #Heathrow13, as they are known, have been told by the Judge that they “should all come expecting custodial sentences”.

They could be jailed for up to three months.

The Judge ruled that by causing disruption for six hours and the delay or cancellation of 25 flights they had caused “astronomical costs” for which they must be punished.

But many people – including the defendants – have pointed out the irony is that those who cause climate change are never punished.

Since the judge ruled that the Heathrow13 should go to prison there has been an outcry that jailing the campaigners is a serious setback to Britain’s long-held transition of the right to peaceful protest.

After the judge told the defendants to prepare for prison, people in the public gallery had shouted out, “shame on you”, “this is a farce” and “history will judge”.

Earlier this month, a letter signed by Shadow Chancellor John McDonald; Green MP Caroline Lucas, head of Greenpeace John Sauven and many others argued that “it would be unjust for these people to receive prison sentences for their actions. Sending peaceful demonstrators to jail would represent a massive threat to our right to protest in the UK.”

The letter added that “Prison is an utterly disproportionate punishment, and would mark yet another example of heavy-handed treatment leading to the suppression of political dissent in the UK today.”

And they asked a highly pertinent question: Experts predict that if Heathrow expands it will cause 150 premature deaths a year by 2030 if it gets a third runway. So “which of these is really the criminal act?”

That question and that of air pollution will not go away. Just today a highly influential report has been published in the UK by the Royal College of Physicians, which argues that “each year in the UK, around 40,000 deaths are attributable to exposure to outdoor air pollution which plays a role in many of the major health challenges of our day. It has been linked to cancer, asthma, stroke and heart disease, diabetes, obesity, and changes linked to dementia.”

The report adds: “The health problems resulting from exposure to air pollution have a high cost to people who suffer from illness and premature death, to our health services and to business. In the UK, these costs add up to more than £20 billion every year.”

So that is 40,000 deaths and £20 billion caused by air pollution. Whilst traffic is the biggest killer, aircraft play a role too. As the report outlines:

“Airports also impact on the communities around them; for example, Heathrow makes a well-recognised contribution to NO2 concentrations across suburban west London”.

If we get a third runway at Heathrow, more people will be affected by pollution, before we begin to talk about climate change. Heathrow already emits 18 million tonnes of carbon dioxide emissions a year. 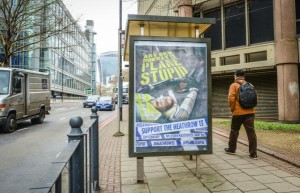 To try and highlight issues such as climate change and air pollution, last weekend posters in support of the #Heathrow13 mysteriously popped up in bus shelters across London.

And tomorrow morning hundreds of people are expected to gather for a “solidarity demonstration” outside the court when the sentencing takes place.

If you live in or near London Plane Stupid are asking for people to be outside the court by 9am sharp.

You are asked wear red clothing to show that that “prison time for protecting the climate is a #Redline.”

One of those to be sentenced is Rob Basto who says “The case is a catalyst for getting the message out that we need stop expanding aviation in the UK, not propose to build new runways.”