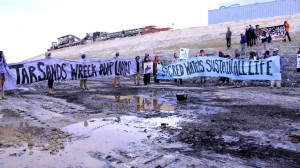 Every day the low oil price is causing more pain for the oil and gas industry and no company or region is immune from the damage being caused.

The latest victim is the Canadian company, US Oil Sands, which announced a “near-total shutdown” of its highly controversial PR Spring Utah tar sands mine at the end of last week.

The mine has been the target of protests by environmental campaigners, who fear that the mine will lead to contamination of groundwater: In August last year, I blogged about how 40 protestors had disrupted the work on the strip mine, the first to be built in the US, located in the Book Cliffs wilderness area.

That same month, the company whose strap line on its website is “changing the way bitumen is extracted”, was still bragging to investors that it oil production would have started by the end of last year.

At the time the trade press was even asking whether Utah was the “New Alberta?”

By November, the startup deadline had been put back with “the Company now expecting commissioning and commercial start-up to occur in Q1 2016.” But this new deadline has been missed too and there is now no confirmed date when production will actually commence.

Last Thursday, US Oil Sands issued a statement, which outlined that, due to the low oil price “the Company has decided to reduce the pace of field construction in order to maintain working capital flexibility”.

The tar sands company added that “The low price environment has impacted the Project as two of the Company’s key contractors have closed their operations in Utah and have caused delays to the Project.”

Buried in the news release was the fact that the US Oil Sands was now struggling to find money to fund the project:

“As the Company has not completed its previously-announced US$10 million royalty financing, US Oil Sands will be pursuing other financing options including the possibility of equity financing.”

Due to these factors, the company argued that “project work will continue at a reduced level.”

Cameron Todd, CEO of US Oil Sands, said: “The oil industry is facing one of the most challenging environments it’s ever seen and it is prudent for us to adjust our construction plan accordingly”.

This positive spin on a bad situation was dissected by the media with the Salt Lake Tribune saying the company had “all but ceased work” on its mine and the Calgary Herald saying the mine was effectively being “put on hold”.

The news will be greeted with joy by environmental campaigners.