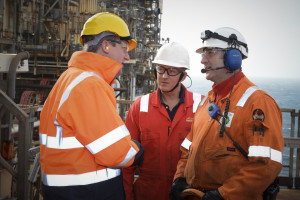 Last week, the British Prime Minster, David Cameron, flew to Aberdeen, the oil capital of the UK to announce £250 million emergency funding to “prop up the North Sea oil industry”; which is reeling badly from the low oil price.

When many economies are pouring millions into renewables, the UK government is still firmly backing oil and gas.

David Cameron promised a new “oil and gas technology centre” which will explore innovative ways to extract oil and gas, just at a time when the scientists are telling us we need to keep oil and gas in the ground.

But this just looks like the start of further government support – which are subsidies from the government – for fossil fuels.

According to the Government, it has also “introduced a £1.3 billion package of tax measures for the oil and gas industry to ensure the UK Continental Shelf remains an attractive destination for investment and safeguard the future of this vital national asset.”

The Conservative Government is also setting up a new Ministerial group on Oil and Gas “to reiterate the UK Government’s commitment to supporting the oil and gas industry and those who work in it.”

If this was not enough, the industry is now demanding that the Treasury cut its tax burden in half.

According to the British press, the industry lobby group Oil and Gas UK (OGUK) plans to lobby the government to make the “very bold move” of scrapping the supplementary tax charges paid by oil firms on top of corporation tax.

The industry has further ratcheted up the pressure on the Government this morning by arguing that if the Chancellor George Osborne does not cut taxation, some North Sea fields will close.

He is quoted in the press today saying “The North Sea is really hurting. The government needs to be agile here. It needs to encourage companies to keep their fields going and keep their people.”

The industry is also hoping for the relaxing of rules over decommissioning redundant oil and gas platforms, which is still a sensitive environmental issue over twenty years since the Brent Spar fiasco.

The irony of the oil and gas industry being bailed out with hundreds of millions of pounds of subsidies, whilst the UK solar industry has slashed thousands of jobs due to cuts in subsidies has angered the solar industry.

An article on the UK Solar Power Portal bemoans that the UK Government “has done nothing” for the industry. “There has been no such commitment for the UK’s domestic solar industry, which is also facing a significant threat to job numbers”, it says.

Indeed, when the Solar Portal contacted the Government as to whether the solar industry would receive a similar “rescue package”, they got no response.