The winds of change have been blowing in Canada over the past year – with new governments, new promises, and a renewed sense of urgency – the momentum for ambitious climate action seems to be growing again.

In an open letter sent today to Prime Minister Trudeau and Canadian Premiers (leaders of the provinces and territories), 75 organizations from across the continent are calling for swift and meaningful climate action to ensure Canada has a chance at living up to its new international commitment to limiting global warming to 1.5 degrees Celsius. This ambitious target will take unparalleled action from across the country, including saying no to new fossil fuel projects like new tar sands pipelines, refineries, and mines. 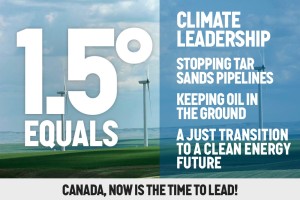 Canada is currently diving into a joint process with federal and provincial governments to design the framework for a new national climate plan, something that new Prime Minister, Justin Trudeau, promised within 90 days of returning from the Paris climate talks. It was at the Paris climate talks that Canada announced its support for limiting warming to 1.5 degrees Celsius – a level that would protect some of the world’s most vulnerable regions.

The letter, signed by diverse constituencies ranging from environmental groups, to faith-based organizations, to development agencies, to First Nations organizations states that real climate leadership, “will be demonstrated by a willingness to shift economic paths and leave carbon in the ground, as well as by charting a course for a thriving clean energy economy that harnesses the ingenuity of people across Canada.”

The scientific reality is that for a decent chance at limiting global warming to even 2 degrees Celsius, more than three-quarters of the fossil fuel reserves we already know about must stay in the ground. And as we divvy up the remaining global carbon budget, high cost, high carbon resources in wealthy countries that have the resources and responsibility to act, must lead the way in building zero-carbon economies no later than 2050.

For a country like Canada, this means putting an end to tar sands expansion (and the infrastructure that enables it), and refocusing on the incredible potential the country has for renewable energy development.

With oil prices at record lows, mounting political, public and legal opposition to new tar sands projects and pipeline expansion, there has never been a better moment to prioritize economic and energy diversification, and build a stable, prosperous economy that doesn’t drag the climate down with it.

This is an unprecedented opportunity for Canadian leadership, but it will require tremendous effort from both the federal and provincial governments. It will require saying no to the fossil fuel energy of the past and yes to the safe, clean and just energy of today. It will require a robust plan for a just transition to support workers as they spearhead the creation of this clean energy economy. And it will require the political courage to chart a new course, for the sake of Canadians and the world alike.

For these reasons, our organizations – representing millions of supporters across North America – will continue to oppose new fossil fuel infrastructure. We simply cannot afford to lock ourselves into further dangerous carbon pollution. But we will also take any opportunity to work with decision makers and leaders to build a cleaner, safer, better Canada.

To read the letter, get graphics to share on social media, and see the press release, visit:
www.one-point-five.ca