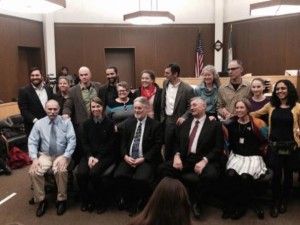 Well we will have to wait for another day and another trial for an American jury to rule on the “necessity defence” for direct action to prevent climate change.

On Friday, five activists – known as the Delta 5 – failed in their bid to allow a jury to determine whether their blockage of a crude by rail train was an act of “necessity defence” against climate change.

Patrick Mazza, one of the Delta 5 who had represented himself, had argued that direct action was needed to “supply some kind of shock to the system, to move the system away from the corporate influence under which it is right now”.

In an earlier hearing the judge had indicated that he would allow the “necessity defence” to be used.

But it was not to be.

The judge eventually ruled that, after hearing two days of evidence, that the defendants had failed in their efforts to persuade him that they had “no reasonable legal alternative” but to block the crude by rail train in a bid to stop climate change.

The judge did, however, praise the Delta 5 – Patrick Mazza, Abby Brockway, Mike Lapointe, Jackie Minchew, and Liz Spoerri – for being “part of the solution” on climate change.

Anthony Howard, the judge, said: “Frankly the court is convinced that the defendants are far from the problem and are part of the solution to the problem of climate change. I am bound by legal precedent, no matter what my personal beliefs might be.”

He added that the defendants were “quite frankly, the kind of tireless advocates we need in this country.”

It was back in September 2014 that the Delta 5 blockaded a crude by rail train carrying highly explosive Bakken crude in the BNSF Delta Yard in Everett, Washington State. They were eventually released and charged with “criminal trespass” and blocking a train.

With the jury unable to determine a “necessity defence”, in the end on Friday, the Delta 5 were convicted of trespassing but were acquitted of obstructing a train.

All five were spared jail as they received suspended sentences.

There has been a mixed response to the verdict. The Guardian reported it as a “blow to environmental campaigners”, as the activists failed in their attempt to use the “necessity defence”.

Others see it differently.

“The Delta 5 are heroes”, argues Alex Ramel, Field Director, Extreme Oil for Forest Ethics. “Their actions were a necessary part of a movement to protect our community and the global climate, and to ensure a just transition that provides solutions for everyone as we move to replace dirty fuels with a clean energy future.”

One of the defendants, Abby Brockway; told the jurors: “I’m actually really pleased with what you delivered to us, because we have options now and there’s more we can do with this, and this was probably the best verdict that could have been returned to us.”

The jurors were sympathetic to the defendants with some hugging each other after the verdicts.

One juror Sue McGowan, told the defendants: “It was hard to take the emotion out of it. I mean, for myself, I didn’t want to convict you of anything, but I had to uphold the law. Emotionally I was like, ‘No, they’re good people, I don’t want to deliver guilty!'”

Indeed as jurors and activists hugged after the verdcits had been handed down, one of the activists, Jackie Minchew, said to the jurors: “Welcome to the movement.”