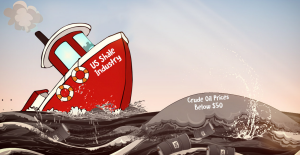 It is not a Happy New Year for Big Oil, as the industry faces another daunting year of low oil prices, which could have a catastrophic impact on the US shale industry, amongst others.

Although there has been a brief respite this morning in the oil price, as tensions between Saudi Arabia and Iran forced the price of a barrel of the benchmark Brent up a dollar to a high of $38.50, the prospects for the year do not look good.

Stoked by concerns of supply disruption, the brief respite was welcome news for the frackers. But it will not hide the fact that, as bad as 2015 was for Big Oil, 2016 looks like it will be whole lot worse. All the indications are that there will be no let off in the oil price war between OPEC and the US shale industry which has led to a glut of oil and tumbling prices.

In today’s Financial Times respected energy journalist Ed Crooks argues that, as bad as 2015 was, “All we have seen so far is the prologue to what are likely to be more dramatic events in 2016.”

Last year, the industry spent the year restructuring, shelving projects and shedding workers in the hope that the oil price would re-bound in late 2015 or early this year. This has not happened.

In fact oil last week was trading at an eleven-year low at around $37 dollars a barrel; nearly 40 per cent down on this time a year ago. And crucially this is nearly $30 a barrel below the break-even cost of $66 which many oil companies need to survive.

And nowhere will the low oil price be more keenly felt than in the US shale industry. As one senior oil analyst from Wood Mackenzie in Houston, R.T. Dukes, argues the US shale drillers are “not set up to survive oil in the $30s.”

The industry will have to adapt even further or face a painful death.

That said, many people were surprised at the resilience of the US shale industry to withstand a year of low oil prices. “You do have to tip your hat to the US shale industry and its ongoing ability to drive down costs and hang in there, albeit by its fingernails,” argues John Kilduff, a partner at Again Capital, a New York based energy hedge fund.

But the industry may not be able to withstand another year of low oil prices.

“For oil and gas producers, 2016 will be a year of cost-cutting, restructuring, refinancing when it is possible, and in some cases bankruptcy when it is not. Merger and acquisition activity, which was sluggish this year because of disagreements over valuations, may pick up speed,” wrote Ed Crook last week.

Increasingly the companies are running out of options, as many have already refinanced and cut costs. They cannot cut into the bone any further.

“A lot of companies [refinanced] this year, and their hope was ‘This will let us fight another day’,” Steve Wood, managing director of the oil and gas team at Moody’s, the credit rating agency told the Financial Times. “Now the other day has come, or is coming. And they are going to run out of money.”