As Congress moves to finalize its latest spending bill, the impact of the dirty deal on crude oil exports contained within it is becoming clearer.

Yesterday, we showed how despite the current low oil price environment, which is being cited by some as a reason lifting the export ban will make little difference to exports or climate, the oil industry is playing a long game, and increases in both U.S. oil production and emissions will eventually result.

We also showed that lifting the ban in exchange for extending renewable energy tax credits was a poor deal in terms of emissions. See the chart below from the National Renewable Energy Laboratory, showing the (lack of) difference between no extension of the Production Tax Credit for wind energy, and a 5-year extension as proposed by Congress. The same NREL report showed that maintaining the PTC at current rates until 2030 would have a major impact on wind deployment; but Congress didn’t do that – they are set to pass temporary, declining extensions to wind and solar tax credits, in exchange for a full and permanent repeal of the crude export ban. 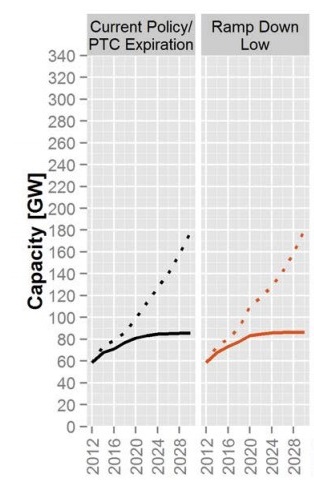 Analysts that have previously been cynical on the issue now agree that lifting the ban will raise emissions, but in the same breath dismiss the impact as marginal.  A widely quoted example is a blog by Michael Levi at the Council on Foreign Relations. Levi has in the past dismissed the climate impact of supply side increases such as drilling Arctic oil, arguing that supply from one source entirely displaces supply from elsewhere, leading to a neutral impact on global emissions.

This assumption of 100% ‘supply side leakage’ stands in contrast to basic economic theory (more supply = lower prices = higher demand) but was perceived to be supported by the behavior of the OPEC cartel, which at times has tried to control the flow of its oil to influence prices. In reality, with less than half of world oil production, OPEC’s ability to act as a cartel was always fairly constrained (note how much prices have in fact fluctuated since OPEC first tried to regulate production in the early 1980s).

If that view of 100% leakage might have had some limited plausibility before, the past year has proven just how fallible the idea is. A surge in supply from U.S. tight oil led to OPEC’s lead player Saudi Arabia switching strategy to one of market share over price control. The result has been a precipitous drop in oil prices and one of the most dramatic spikes in oil demand seen for decades. Indeed, the impact of surging oil supply on demand and thereby emissions has never been clearer.

Presumably as a result of this, and perhaps also due to new analysis from Stockholm Environment Institute that shows that supply side leakage is, (erm) leaky, Levi now concedes that new supply has at least a 50% impact on emissions. He therefore estimates that if lifting the ban triggers U.S. production that would not otherwise occur then emissions from 50% of that extra production should be counted as the potential climate impact of the policy.

One of the main point of Levi’s blog however is that emissions caused by lifting the export ban are small compared to flagship U.S. climate policies such as the Clean Power Plan or the CAFE vehicle efficiency standards.

While at least no longer dismissing supply-side impacts outright, Levi does hold them to a different standard from demand side policies. He in fact halves the impact of lifting the ban (compared to the numbers we gave yesterday) three times:

Now, there may be analytical reasons for each of those, but let’s at least compare apples with apples. When Levi evaluates the Clean Power Plan and CAFE vehicle efficiency standards, he does not deduct demand-side leakage, he counts the per-year impact after 10 years, and he uses pre-price crash analysis. As a relevant example of demand-side leakage, consider how the coal industry has reacted to US environmental regulation by moving to export to Asia.

With these estimates, Levi calls the impact of lifting the ban a mere fiftieth of the Clean Power Plan and CAFE standards. If he actually compared like with like, he would still find the ban significance smaller than those policies, but not by orders of magnitude. Using the more comparable 500 kbd increase in production, which translates to 80 MT/yr of emissions (equivalent to 21 coal plants), the lifting of the ban could knock 25% off the impact of CAFE, or 33% off the Clean Power Plan (CPP). These figures are based on assuming the same level of discounting for demand-side leakage (50%) as Levi applies to supply side leakage. I.e. if the CPP saves 240 million tons of emissions, we assume that after leakage that is 120 million tons. Lifting the ban becomes 40 million tons, which is one third of the CPP’s impact.

While we welcome and encourage the growing realization among analysts such as Levi that building new fossil fuel infrastructure does have a climate impact, as do export policies that stimulate supply, we would like to see it held to the same standards as the more fashionable demand-side approaches.

In any case, the Clean Power Plan and CAFE are nowhere near sufficient to bring U.S. emissions down to where they should be, despite being very important steps toward doing so. It therefore makes little sense to support policies that reduce or counter those positive impacts simply because the impact is a partial rather than complete reversal. With the climate crisis looming we need to prevent every ton of emissions we can. Lifting the ban while implementing the CPP is similar to three steps forward and one step backward. Instead we should be moving aggressively forward with zero tolerance for backtracking. That is how we will achieve our climate goals.