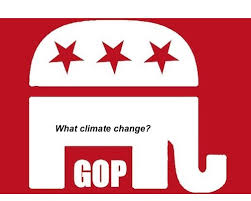 bama may be talking the climate change talk in Paris, but back home the Republican Party (GOP) is doing everything in its power to make sure there is no deal.

Although Obama is dismissive of the Republican denial machine, we should all be taking it seriously. “It may be hard for Republicans to support something that I’m doing, but that’s more a matter of the games Washington plays,” he told reporters on Tuesday. “That’s why I think people should be confident that we’ll meet our commitments.”

“There’s a reason why you have the largest gathering of world leaders probably in human history here in Paris,” Obama added. “Everybody else is taking climate change really seriously.”

As the world leaders belatedly wake up to the risks of climate change and take it seriously, the Republicans refuse to budge in there belligerent attitude to climate denial.

Indeed, on Tuesday as Obama spoke in Paris, The New Yorker points out that “congressional Republicans were doing their best to undermine him”.

Both resolutions, known collectively as the Clean Power Plan, The New Yorker points out “are crucial to the Americans’ negotiating position in Paris.” The votes were intended to “send a message to the climate conference in Paris that in America, there’s serious disagreement with the policies of this president,” Ed Whitfield, a Kentucky Republican, argues.

Whitfield is not alone: Only eight Republicans in Congress out of 278 have made statements accepting the reality of man-made global warming.

Whilst many people may not be surprised by this, it is deeply worrying for the prospects of action on climate change in any post-Obama era, especially if the new President was a Republican.

When the Associated Press recently asked a panel of climate scientists to score the knowledge of prospective Republican candidates on climate change the results were shocking. Donald Trump got fifteen, Ben Carson thirteen and Ted Cruz six. “This individual understands less about science (and climate change) than the average kindergartner,” Michael Mann, said of Cruz. “That sort of ignorance would be dangerous in a doorman, let alone a President.”

The issue of Republican denial is also highlighted by the influential Paul Krugman in today’s New York Times: “Unfortunately, given the importance of the United States, the extremism of one party in one country has enormous global implications.”

He adds: “We’re looking at a party that has turned its back on science at a time when doing so puts the very future of civilization at risk. That’s the truth, and it needs to be faced head-on.”

But rather than being faced head on, the Republicans are assisted in their campaign of denial elsewhere. “The inability of our news media, our pundits and our political establishment in general to face up to that truth is an important contributing factor to the danger we face,” argues Krugman.