The COP21 climate negotiations in Paris opened on Monday with a flurry of activity, speeches, and announcements from some 150 world leaders gathered to kick things off. It’s hard to come away from a day like yesterday without feeling a tinge of hope continuing…that is, until the real negotiations begin.

While many impressed with their calls for action from various countries around the world, close watchers would note that the leaders of Pacific island states really stole the show. As they should, too — these are leaders of nations whose very existence are at stake. Their moral calls for action are genuine pleas to save the countries they represent, and they were powerful.

Marshall Islands Prime Minister Christopher Loeak put it bluntly: “Everything I know, and everyone I love, is in the hands of 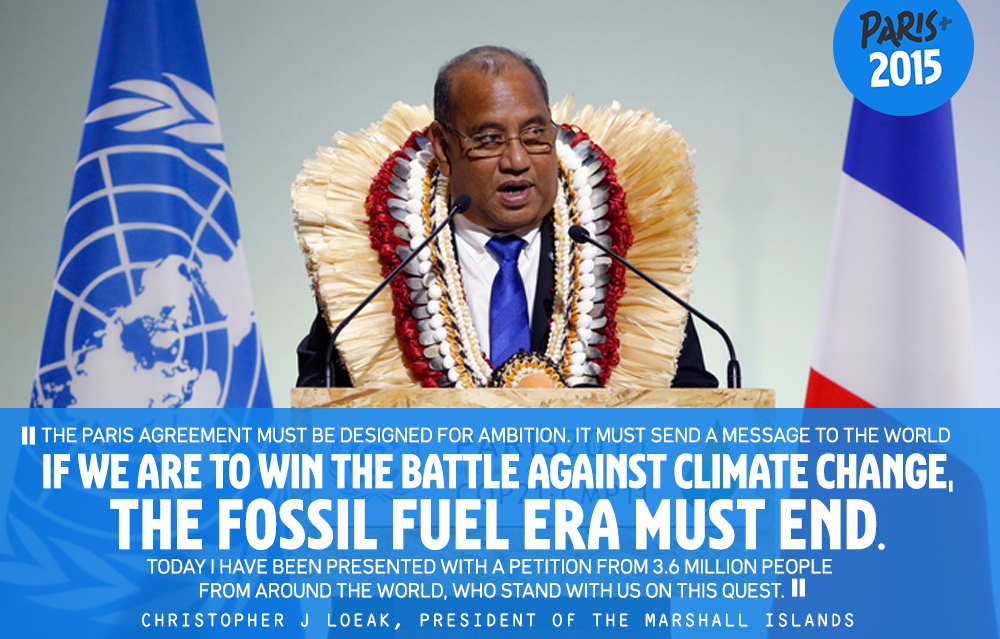 those of us gathered here today.”

While the Island leaders shined with passion and moral clarity, it’s also worth noting the largely positive differences between President Obama’s speech here in Paris compared to the reception he received in Copenhagen at climate talks six years ago. At the negotiations in Copenhagen in 2009, President Obama’s speech was met with frustration and anger by many around the world, and he struggled to arrange meetings with leaders from China and other countries. This year, here in Paris, the President’s speech was met with applause, and it was apparently sandwiched between productive engagements and meetings with leaders from China yesterday as well as island states this morning. A different tune, to be sure.

Later in the day, the Climate Vulnerability Forum — a group of 20 vulnerable countries ranging from Bhutan to the Philippines to Bangladesh to Tuvalu — came together with a bold set of demands for the negotiations. They called for full decarbonization and 100% renewable energy by 2050, and for a stricter limit of global warming to 1.5 degrees C in order to better safeguard the most vulnerable. Read more about the CVF statement here.

Also on Monday, a group of countries that make up the “Friends of Fossil Fuel Subsidy Reform” delivered a statement calling for the elimination of some fossil fuel subsidies. The communique is a good step, but it doesn’t address the hundreds of billions in fossil fuel production subsidies handed out each year, most of which are provided by rich countries. Civil society groups from New Zealand used the statement to shine a light on the hypocrisy inherent in subsidizing fossil fuels while urging climate action at the same time, and New Zealand was awarded a “Fossil of the Day” for this hypocrisy.

And there was more…a great roundup of other announcements including new Solar Alliance as well as renewable energy funding announcements can be found here.

So momentum appears to be high as we head into the real negotiations over the coming two weeks. But, as Saleemul Huq of IISD spoke about in a press conference Tuesday morning, it’s imperative for negotiators to actually listen to the words their Heads of State have spoken. It’s far too easy for negotiators to fall into the standard “negotiation mode” and forget about the bigger picture and imperatives to act.

Already negotiations are getting closed off to observers and some potential backsliding appears to have begun behind closed doors. That’s a pretty standard practice in these negotiations — the first week is full of hard lines and negotiating stances. Unfortunately, however, we don’t have time for standard negotiations and continued delays.

On Sunday, hundreds of thousands of people all around the world demanded action now. On Monday, world leaders echoed the call with strong rhetoric and new pledges. On Tuesday and in the days ahead, the question remains: Will negotiators in Paris answer the call?