I have a strange feeling today in Paris as the UN climate negotiations open in a tense city, shrouded in clouds of terrorist attacks and early winter darkness.

For someone who has been to more of these big climate negotiations than he cares to admit over nearly the last 10 years, optimism is sometimes a hard sentiment to muster. The UN climate talks are so often marred by contentious battles, monotonously tedious negotiations, and disappointing outcomes.

But this year, somehow, I find myself with an optimistic feeling as the negotiations kick off. And one reason for such optimism is pretty clear: our movement is winning.

Over the past year the climate movement has chalked up some huge wins for the planet. In the US, we finally put the disastrous Keystone XL tar sands pipeline to bed for good. We’ve run Shell out of the Alaskan Arctic waters. We’ve beaten back attacks from the right on new regulations regulating carbon pollution from coal power plants. Globally, action to combat climate change has been catching fire like never before, from Germany standing up against coal mining, to Pacific Islanders fighting for the future of their countries. And our movement has come together to stand for justice in new, powerful ways like never before.

Yesterday, on the eve of the Paris climate talks, people came out in force from Saudi Arabia to Fiji to Australia to New York. Over 2700 events took place in a global climate march around the world. Even in Paris, where protests have been curtailed due to security concerns in the wake of terrorist attacks, thousands gathered in a human chain along what would have been a massive march. It was a strong and creative approach to having their voices heard despite the restrictions. 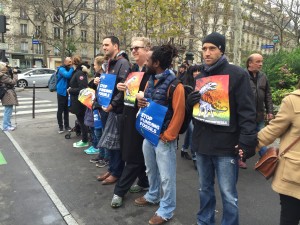 Another reason for optimism? Paris is not Copenhagen.

Many have been asking, “will Paris be another Copenhagen?” referring to the somewhat disastrous climate talks in Denmark six years ago. It’s a reasonable question — Copenhagen was the scene of the last negotiations of this scale and buildup.

But the answer to that question is a resounding no. The differences between the Paris climate conference and Copenhagen climate conference could not be greater. The movement has grown exponentially since 2009 and action on climate change is become ever more robust by the day. We are simply at a different place than we were as the climate talks opened in 2009. (More on why Paris is not Copenhagen here, here, and here.)

Even the sequencing of these negotiations are different from Copenhagen. Today at the opening of the COP, we will see 150 world leaders making statements on the urgency to act on climate change and what must be agreed here in Paris. In 2009 in Copenhagen, world leaders came towards the end of the negotiations, trying to salvage a “deal” out of the chaos. This year, with leaders coming at the outset, the send a signal to their representatives that they must do the hard work of finding a workable agreement instead of an unworkable political declaration.

But what’s more, expectations for Paris are far more realistic than what was expected out of Copenhagen. We learned in Copenhagen that no one meeting will ever solve climate change; the fight to avoid the worst impacts of climate change will be a long one, waged in many different venues and battlefields. What’s expected out of Paris is a strong and important step in the road to climate safety, but it’s just that: a step.

So as the climate negotiations begin here in Paris, I look around and see some reason to hope, amidst growing threats and impacts. That’s not to say the success of Paris is a foregone conclusion; leaders must come to the table ready to work together. And surely what comes out of Paris won’t be nearly enough to stave off the worst effects of climate change. We’ll need to continue building the movement and demanding greater action in the weeks, months and years ahead.

It remains the case that to a large extent, world leaders need to put their money where their mouth is. Our recent research shows that the G20 countries alone are still subsidizing the production fossil fuels at a rate of $452 billion per year. It’s time to #StopFundingFossils as a start, to be sure.

But nevertheless, I find myself with hope for the Paris climate talks as a key moment in our collective struggle. These next two weeks will make it clear whether that hope is misplaced.