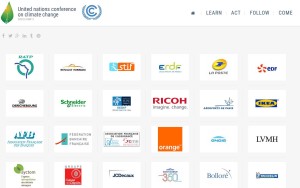 With less than one week before the Paris climate talks, known officially as the  21st Conference of the Parties (COP21), the campaign group Corporate Accountability International has released a report exposing the “filthy” track record of some of the corporations sponsoring the talks.

The organisation argues that there is an inherent conflict of interest between the stated aims of the UN climate process and many of COP21’s corporate sponsors, given their role as global carbon polluters.

It is easy to see why: Together, the four corporate sponsors outlined in the report represent direct ownership of and/or investments in more than 46 coal-fired power plants; exploration of oil sands in Canada, hydraulic fracturing in the UK, and the Tata Mundra coal-fired power plant in Gujarat, India; more than €30 billion invested in the French coal industry; and more than 200 megatons of CO2 equivalent emissions.

Corporate Accountability International (CAI) argues that “by detailing the corporations’ abuses to the environment and aggressive lobbying to undermine environmental policy, the report lays bare the conflict of interest inherent in allowing such sponsorship to exist.”

Patti Lynn, executive director of CAI contends that “Inviting some of the world’s biggest polluters to pay for the COP is akin to hiring a fox to guard a hen house.” She adds: “We must eliminate this conflict of interest before COPs become corporate tradeshows for false market-based solutions.”

The report details how the four sponsors have long track records of “policy interference that contradict the green public relations” they advance. Whilst energy giant EDF claims to be “committed to a decarbonized world,” it is an active member—alongside ExxonMobil and Shell—of the European business lobby group, BusinessEurope.

Indeed, BusinessEurope has a long history of being opposed to climate action. In 2010, it came second in the EU’s Worst Lobby Awards. It was nominated “for its aggressive lobbying to block effective climate action in the EU while claiming to support action to protect the climate”. On behalf of its members, BusinessEurope, also openly opposes the “market deployment of energy produced from renewable sources.”

The report also outlines the greenwashing going on over pollution. CAI reveals that Engie “is a polluter with few rivals”, being responsible for over 131 megatons of greenhouse gas emissions. This is the equivalent to pollution emitted from driving around the globe 12 million times.

“Despite recent announcements to stop new coal projects, Engie still owns 30 dirty coal power plants worldwide,” argues Célia Gautier, policy advisor at Climate Action Network France, “The French state is directly responsible for Engie’s greenwashing activities as it owns 33% of its shares and accepted to put them in their list of COP21 sponsors.”

In addition, BNP Paribas is one of the largest coal financiers in France. Between 2005 and 2014, the corporation provided half of the total financial support (€15.5 billion) from French banks to the coal industry.

The momentum is growing to have large polluting companies excluded from the talks. In May, more than 60 organizations launched a global campaign to kick big polluters out of climate policy.

Using the UN legal precedent, Article 5.3 of the WHO’s Framework Convention on Tobacco Control, they say the same should happen with Big Oil and the COP talks.