This year, G20 leaders reiterated their same tired commitment to end fossil fuel subsidies, for the seventh time in a row. It’s starting to ring hollow, especially considering that a report we released last week with the Overseas Development Institute exposed $452 billion in G20 government handouts each year to Big Oil, Gas and Coal to explore for and produce more fossil fuels.

There is a groundswell of public pressure building on G20 leaders to finally live up to their promises. This weekend, frustrated citizens on every continent took action to call on G20 leaders to #StopFundingFossils, using Twitter to reach more than 7 million people. Thousands of people took the time to send tailored messages directly to individual G20 leaders over email and twitter, and on-the-ground actions calling for an end to dirty polluter handouts took place in Istanbul, Tokyo, Washington DC, Seoul, Berlin, and beyond. You can continue to take action today.

Less than two months ago, China and the US agreed that putting a concrete deadline on the removal of fossil fuel subsidies would be a shared priority during China’s G20 presidency in 2016. It’s disappointing to see that G20 leaders and this year’s G20 host, Turkey, didn’t get the memo. Given the urgency of climate change, next year, G20 leaders must commit to phasing out all fossil fuel subsidies by 2020. 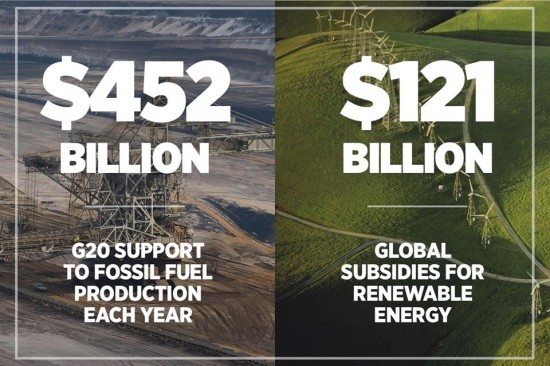 Certain subsidies need to end immediately. The world’s best science already tells us we must leave at least three quarters of known fossil fuel reserves in the ground. Subsidies that promote exploration for new fossil fuel reserves are compatible only with climate disaster. Likewise, it’s embarrassing that the world still subsidizes filthy coal, and those subsidies need to end now.

OECD countries now have an additional opportunity, as they meet this week to take a decision on limiting public finance for coal. This is a key test of whether rich countries are committed to climate action before December climate talks in Paris, and it’s time for them to step up.