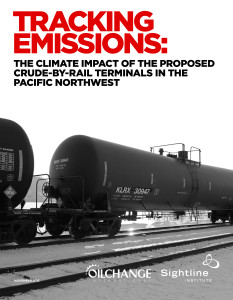 Ultimately, if we’re going to prevent large parts of this Earth from becoming not only inhospitable but uninhabitable in our lifetimes, we’re going to have to keep some fossil fuels in the ground.

Our new report: Tracking Emissions – The Climate Impact of the Proposed Crude-By-Rail Terminals in the Pacific Northwest

The states of Washington and Oregon are facing a quadrupling of their crude-by-rail unloading capacity, as the industry proposes a slew of projects to receive up to eight extra 100-car trains per day of tar sands and Bakken crude.

While few people in the region will welcome the risk those trains and the extra shipping would bring, also at stake is the reputation of these states as among the more environmentally conscious and least beholden to the fossil fuel industry.

Oil Change International was commissioned by the Sightline Institute to assess the impact these terminals would have on climate change. We did this by simulating oil industry investment decisions, deploying the same economic tools companies use to make those decisions, to see how much new carbon would be unlocked. The results are revealed in our new report, published jointly with Sightline.

Let’s start with the tar sands. As we reported last month, the pipeline system carrying tar sands out of Alberta is 89% full, and will be completely full in less than two years. All of the proposed new pipelines are facing huge and growing public, political and legal opposition.

Since that report, President Obama has rejected Keystone XL, and there’s now a real prospect that none of the new pipelines will get built. The result would be the end of growth for the tar sands: few if any new extraction projects would be economically viable without pipelines.

That conclusion was based on the high cost of railing crude from Alberta to the U.S. Gulf Coast, which is still the major growth market for tar sands. But the Pacific Northwest (PNW) is a shorter distance, so we looked at the different economics of railing tar sands there.

We found that in the absence of new pipelines, those new rail terminals – if built – could become the sole driver of new growth in the tar sands. The lower cost of rail to the PNW could enable up to 400,000 barrels per day of new tar sands extraction that would otherwise be judged unviable by companies. The emissions from that extra tar sands production would be equivalent to that of up to 22 million cars.

As well as driving growth in the tar sands, the new terminals could give a boost to fracking in the Bakken shale of North Dakota. The more favorable transport economics could lead to an additional 100,000 barrels per day of production, with equivalent emissions to another 6 million cars.

So not only do the proposed terminals pose an enormous safety risk to communities in the path of the oil trains they would serve, but they are clearly a threat to our shared climate. The growing movement against these terminals is poised to play a critical role in stopping expansion that would prop up the desperate last efforts from the tar sands industry to grow. This is the same place, remember, where proposals to export massive amounts of U.S. coal to Asia were mostly stopped by public opposition. In a significant step this week, the City of Portland – where one of the terminals is proposed – passed a resolution to oppose all new fossil fuel infrastructure (see also commentary on the move from Columbia Riverkeeper).

Rail transportation of crude oil in the U.S. has increased over 4000% since 2008. Apart from its direct additional capacity, it has brought a flexibility to oil development, where new extraction projects can be developed before they have a pipeline export route. As such, it has underpinned the growth of U.S. and Canadian production, from 10 million barrels a day in 2008 to 16 million in 2014 – exactly the wrong direction given the urgency of the climate threat. Just as communities across the continent have stopped Keystone XL, and are working stop the other proposed pipelines, people in the Pacific Northwest aim to stop rail expansion, to prevent the devastating threat of tar sands growth.

When President Obama rejected the Keystone XL pipeline last week, he made good on a promise he made at Georgetown University two years ago: that if the project adds significantly to carbon emissions, it is not in the national interest.

This climate test sets the standard for future energy policy decisions: if it worsens climate change, it should not be built. Regulators in Washington and Oregon are currently considering whether to permit the new rail terminals: they should follow Obama’s lead and apply a climate test. A test these terminals clearly fail.