“The decision you have made and the leadership you have shown by rejecting this pipeline marks a critical turning point,” the laureates write.  “A dangerous fossil fuel driven future can no longer be considered inevitable; the climate impacts have become too serious and too devastating to ignore.” 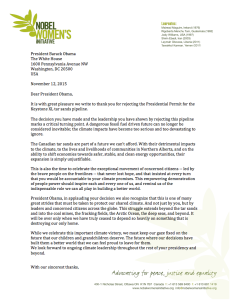 The thank you letter, signed by ten laureates, offers the sincerest thanks to the President for his decision, and also points to the millions of people across the continent who stood up for safer communities and a safer climate:

“This is also the time to celebrate the exceptional movement of concerned citizens — led by the brave people on the frontlines — that never lost hope, and that insisted at every turn that you would be accountable to your climate promises. This empowering demonstration of people power should inspire each and every one of us, and remind us of the indispensable role we can all play in building a better world.” 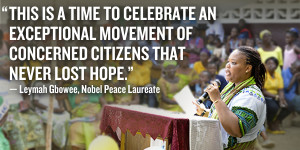 The Keystone XL tar sands pipeline would have led to the expansion of the Alberta tar sands – some of the most carbon intensive oil on the planet – and unlocked significant amounts of greenhouse gas pollution. In a recent report, we identified that without major new pipelines such as Keystone XL, the tar sands will have run out of room for growth and some 35 gigatons of carbon will be kept in the ground.

The Laureates have been important champions of the moral imperative for climate action. With hundreds of millions of lives and livelihoods already impacted by the changing climate, the time for serious action is now. In addition to the climate impacts, the Laureates also urged the rejection of the pipeline based on the impacts of tar sands extraction on First Nations, and other communities, on the front lines of development.

The thank you letter ends with the signatories looking forward to President Obama’s ongoing climate leadership throughout the remainder of his presidency and beyond.

The full letter and press release can be read here.