It’s been an amazing few days of celebration and reflection for the #NoKXL movement since the Keystone XL rejection was announced by the President. What’s more, the flurry of post-mortems, reflections, and stocktaking post-Keystone XL has been nearly as impressive as the campaign itself, to some degree.

It’s clear that there’s a lot to learn the fight against Keystone XL. Many lessons on coalition building, on tactics, on messaging, and on and on. And one of those key lessons is a simple one: set a clear demand and stick to it.

Keystone XL is obviously not the end of our fight. We have another clear demand, and that push continues: Stop Funding Fossils.

It’s a concept that’s as simple as it is necessary. We shouldn’t be funding the fossil fuels that are causing this climate crisis. Our taxpayer dollars should not be propping up an industry that’s hell-bent on wreaking climate chaos. Our investments should not be seeking profit off of climate criminals.

We must Stop Funding Fossils.

So this Saturday, November 14th, we’ll be working to make this demand loud and clear, with the support of many across the globe. Want to be a part of it? Sign up here. 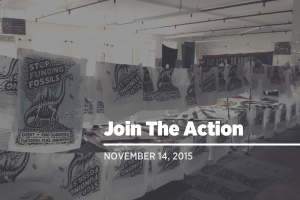 On Saturday, friends will be gathering in 10 key locations around the world, and also online from countless more locales. We’ll be targeting a set of world leaders that we know are blocking action to end dangerous fossil fuel subsidies. They’ve said they would for years, but their actions say otherwise. As the Keystone XL fight has taught us, we can’t stop pushing until real action is taken. So push we will.

In rejecting Keystone XL, President Obama said that we have to start keeping fossil fuels in the ground. We believe he means it, but it’s time for all world leaders to show it. The first step? Stop Funding Fossils.