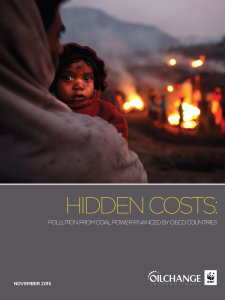 This report finds that support for coal-fired power plants from the ECAs of OECD countries is implicated in tens of billions of dollars in local health impacts and climate change pollution each year.

Coal-fired power plants financed by Korean ECAs – supported by the government – were found to be associated with the greatest damage to communities overseas (as much as $6.4 billion per year in local air pollution costs alone), followed by Japan and the US.

Using an approach pioneered by the International Monetary Fund, the analysis found that financial support to coal-fired power plants from OECD member countries is implicated in an estimated $8 billion to $32 billion in damages every year. These findings indicate that the costs of just one year of damage caused by these ECA-backed coal plants is likely far greater than the total finance provided by OECD ECAs.