So, in 2009 when G20 countries committed to ending that support, we cheered. But the cheering has ended. Year after year we hear empty promises to move forward in implementing that commitment. And year after year reports come out showing governments are still funding fossil fuels at enormous rates.

Six full years ago we celebrated as the 20 richest countries in the world committed to end fossil fuel subsidies in the “mid term”. That “mid term” is upon us and it’s time to act.

So next week, on Saturday November 14th, we’re raising some noise. We are demanding our leaders live up to their commitments. We’re demanding they square their climate rhetoric with action. We’re telling them that it is time to Stop Funding Fossils. 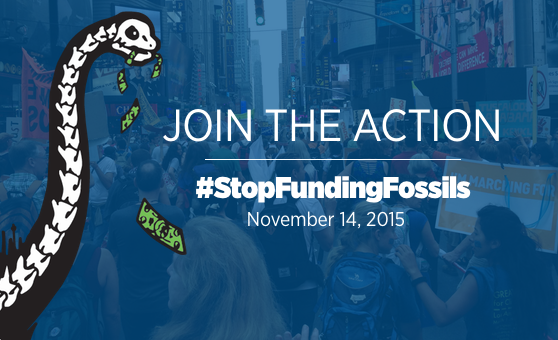 While action has been scarce, public momentum has been growing. Even businesses, pensions funds, and other public institutions are on board, by way of the wildly successful divestment movement. Now world’s governments need to finally get on board, and stop propping up an industry that’s on its way out, and for good reason. We want our public money divested from fossil fuel support, plain and simple.

With a week remaining before the day of action, the effort is already paying dividends. A preview Stop Funding Fossils action targeted Japan during the UNFCCC session in Bonn in October, highlighting their recalcitrance in discussions to end coal export financing. Just days later, news emerged of a potential compromise deal being put on the table. The deal remains to be finalized, but Japanese leaders have felt the pressure and appear to have come to the table willing to negotiate.

In a recent joint announcement from the US and China on climate action, they expressed an interest in setting such a deadline. Civil society has made it clear: by 2020, fossil fuel subsidies should be a thing of the past. It’s time for that deadline to become reality.

Already, over 30 organizations from around the world have signed on to support the November 14th Day of Action to Stop Funding Fossils. Events are being planned in 10 locations on multiple continents and online action is expected to dominate the web. With any luck, and some solid organizing, leaders around the world will be forced to confront the reality that millions around the world are demanding an end to fossil fuel subsidies.

November 14th also marks the start of the final countdown for public support of fossil fuels and the launch of a global campaign to end them once and for all. We’re putting governments on notice: within the next five years, fossil fuel subsidies must be made a thing of the past.

On November 14th we will say loud and clear: Stop Funding Fossils. Join us.