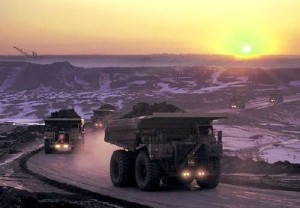 Yesterday, after months of painstaking work, Oil Change International launched a report entitled “Lockdown – the end of growth of the tar sands”.

The forty page report is as bold as it is different, in that it is based on a model which looks at the entire North American tar sands pipeline system.

The question behind it was a simple one to ask but a complicated one to answer: will tar sands growth be curtailed by constraints in the pipelines trying to get the dirty fuel to market.

No one had ever attempted to work this out before. Well no one from outside the tar sands industry. As my colleague Hannah Mckinnon yesterday pointed out, using the model – called INAP – the Integrated North American Pipeline model “ we were able to determine bottlenecks, hurdles, and pressure points for the industry”.

As Hannah also pointed out yesterday, after months of data-crunching, the model spat out a simple truth: “without major new pipelines, the tar sands have run out of room to grow.”

We thought this was big news. So did the Financial Times. The report ran exclusively in yesterday’s FT under the headline, “Pipeline problems hinder Canada’s oil exports”.

The pipeline problems are certainly stacking up for the industry. As the paper pointed out the controversial Keystone XL pipeline, the main way the industry was intending to get the tar sands to market, remains in political limbo. Hillary Clinton, if elected has said she would stop the project too.

Other pipelines such as Energy East and Northern Gateway all face significant opposition. The bottom line for the industry is that popular protests by activists and First Nations against the tar sands are curtailing growth. And pipelines – or lack of them – are the bottleneck in the system.

The FT article quoted another colleague from OCI, Greg Muttitt, who had spent weeks crunching the numbers in the model, saying simply: “Some projects could still have been viable if there had been pipelines. It was the lack of pipelines that tipped them over the edge.”

And before the ink was dry on the paper came the news that Shell was stalling construction of its 80,000 barrel per day Carmon Creek tar sands project.

The statement from the company says it all: “After careful review of the potential design options, updated costs, and the company’s capital priorities, Shell’s view is that the project does not rank in its portfolio at this time.”

And here comes the killer blow. The company added: “This decision reflects current uncertainties, including the lack of infrastructure to move Canadian crude oil to global commodity markets.”

Shell, by its own admission, looked like it had just proved the Lockdown analysis right.

Shell’s retreat will not have been taken lightly, either: the company has taken a $2 billion write-down on the project. Coming so soon after its extremely expensive Arctic folly, this will be a bitter and costly pill to swallow.

But just to make sure, after the announcement, Greg Muttitt ran the numbers about the Carmon Creek mine through the INAP model.

And he came to a startling conclusion: “This is the first major tar sands project that has been stopped mid-construction, writing off sunk costs,” said Muttitt. “Many have been suspended before breaking ground. So this is a big deal – and it’s the lack of pipelines that stopped it.”