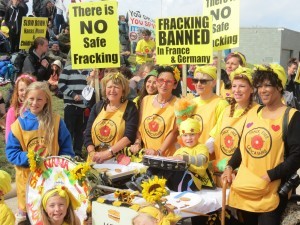 For a long time now the oil industry and its supporters have tried to claim that fracking is safe and often opposition is based on ignorance and not the facts.

In remarks that are certainly deeply controversial, Professor Averil Macdonald, the newly appointed chair of the industry body UK Onshore Oil and Gas, argues that many women are against fracking because they “don’t understand” the process due to a lack of education in science.

In contrast, she said, men are more in favour of fracking because they were often persuaded by “an awful lot of facts”.

Macdonald’s comments look set to outrage many female opponents of fracking just at a time when she is hoping to persuade more women to accept the controversial technique.

Professor Macdonald is a board member of Women in Science and Engineering as well as Emeritus Professor of Science Engagement at Reading University, near London.

She is quoted by the British press as saying that “Women, for whatever reason, have not been persuaded by the facts. More facts are not going to make any difference.

She added that: “What we have got to do is understand the gut reaction, the feel. The dialogue is more important than the dissemination of facts.”

She partly blamed the reason that women were against fracking due to the fact they generally stopped their scientific education earlier than men.

“Frequently the women haven’t had very much in the way of a science education because they may well have dropped science at 16”, she argued. “That is just a fact”.

Continuing with the same theme she contended that “Women do tend not to have continued with science. Not only do they “show more of a concern about fracking, they also know that they don’t know and they don’t understand.” She went on to say that this position was “entirely reasonable.”

On the other hand, Macdonald said men were more willing to accept fracking. “Why are men persuaded? That’s because an awful lot of facts have been put forward. Men are much more likely to say ‘fair enough” and that they understand.

She also complained that too many people in the top of the oil industry were men. All the executives who interviewed her for the role with United Kingdom Onshore Oil and Gas were men.

She went on to put forward the argument that “Women are always concerned about threats to their family more than men. We are naturally protective of our children. I would similarly be concerned but I read the literature and I feel comfortable that I understand.”

This view point is certainly controversial – partly because I know many women who are against fracking and who are certainly abreast of the facts.

There are many women in the US, who are on the frontline of the shale gas revolution have been forced to undertake a crash course of the facts in order to protect their families when the frackers have started in their backyard. And they are against fracking precisely to protect their children and familes.

I also know many men who are against fracking who have seen the evidence and are deeply, deeply, concerned.

Macdonald says she has read the scientific literature and is happy. However, I think she should revisit some of the new scientific studies being published in peer reviewed journals on fracking.

I think if she did, she too, like many others, would have reason to be worried.