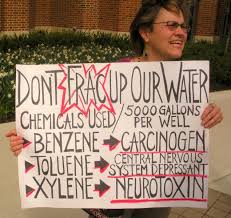 Four months ago, the UK-based CHEM Trust issued a report and briefing paper on how toxic chemicals from fracking could affect wildlife and people.

The scientists were particularly concerned about the chemicals used in fracking and how they could include carcinogens, reproductive toxicants and endocrine disruptors.

The latter can disrupt the highly sensitive hormonal controls in humans and wildlife.

The report, released in the UK, caused a bit of a stir and a backlash against the scientists themselves. The right-leaning Daily Telegraph said the report was no more than “recycled scare stories”. The shale industry also dismissed the research.

The scientists tested 24 chemicals used in the fracking process and concluded that 23 of them were endocrine disrupting chemicals (EDCs). These chemicals were tested for their ability to activate or inhibit action of key hormones in the body such as estrogen, androgen, and progesterone.

The scientists exposed pregnant mice to these chemicals in levels that realistically reflect what humans might face from drinking water exposed to fracking fluids.

When the males reached adulthood they exhibited lower sperm counts and heavier testicles and overall weights as well as “persistent effects on the structure of the heart.”

The scientists found that:

“This study is the first to demonstrate that EDCs commonly used in fracking, at levels realistic for human and animal exposure in these regions, can have an adverse effect on the reproductive health of mice,” said the study’s senior author, Susan Nagel of the University of Missouri in Columbia and an expert in reproductive and environmental health.

Nagel added: “In addition to reduced sperm counts, the male mice exposed to the mixture of chemicals had elevated levels of testosterone in their blood and larger testicles. These findings may have implications for the fertility of men living in regions with dense oil and/or natural gas production.”

The bottom line, she adds is that “hormones work at very low concentrations naturally. It does not take a huge amount of a chemical to disrupt the endocrine system.”

The research could have “fertility implications for people living in shale gas zones in the United States”, argues the Independent newspaper.

And it is not just in the US people should be worried, either.