Twenty four hours after Shell’s seismic announcement that it was pulling out of the Arctic “for the foreseeable future,” the announcement is still making waves.

As the dust settles on the shock announcement, this is not looking like a temporary retreat, with the oil company waiting in the wings for the oil price to recover, before trying again. This is looking like a total strategic withdrawal for a very, very, long time. If not forever.

And where Shell fears to tread, other oil companies will dare not go, either. The headline in today’s Financial Times says it all: “Shell’s Arctic defeat ends dream of new frontier”.

The ramifications of Shell’s humiliating decision are also becoming clearer. Let us not forget that this is an oil giant that is used to corporate failures and repairing its tarnished reputation – it did so after being found to be complicit in the murder of Ken Saro-Wiwa; it did so in the aftermath of the Brent Spar fiasco and it did so after its reserves scandal, but it will now have to do it again.

But most worrying for the company, Shell’s reputation has once again been severely dented within the investor community. It basically bet $8 billion of shareholders’ money on finding oil and lost. Analysts describe the amount as “staggering”. It is the most expensive well ever drilled. And it came up dry.

The City reacted badly to the announcement yesterday, when Shell’s B shares, the most widely traded, dropped 2.7 percent to 1,514.50 pence in London, their lowest price since August 2009. 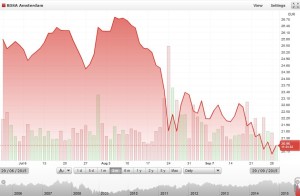 The bottom line for Shell is that its share price has declined 32 percent this year. (See chart on the left) That is an unsustainable decline.

And there is no respite. Shell expects to suffer losses of over $4 billion in the third quarter, reflecting asset write-down costs added to the costs of contractual commitments.

Its reputation has also taken a severe battering with the general public, after the global campaign against its Arctic drilling. In private, the company was said to be surprised by level of popular opposition it had faced and how the protests were a threat to its reputation.

A victorious Greenpeace U.K. Executive Director, John Sauven said yesterday: “The Save the Arctic movement has exacted a huge reputational price from Shell for its Arctic drilling program. And as the company went another year without striking oil, that price finally became too high.”

And it gets worse for the company: The company’s Arctic gamble with due, in part, to the fact that the company is running out of oil and gas reserves.

Writing in the Financial Times this morning, Nick Butler, ex-BP, and now Visiting Professor at Kings College London, argues: “More worryingly from Shell’s point of view, is the prospect of a declining reserves base. In common with several of the other oil majors, it is pumping oil faster that it can book new reserves of bankable assets”.

Butler points out that for the past three years the company has failed to find sufficient resources to replace production. There may be oil and gas out there, but Shell cannot get access to it.

Shell’s lack of reserves was a primary driver of its take-over of the BG Group, but even here development of some of the reserves off Brazil, for example, is “very uncertain”, argues Butler.

And he goes on to argue that “the Arctic debacle is a salutary reminder to oil majors that their old business model is reaching the end of its life”.

Basically, the future for Shell is to adapt or die.

For two decades, many commentators have called on the oil majors to become truely energy majors, and pioneer the clean energy revolution. And this means renewables, not investing in gas and trying to pretend it is clean.

When BP spent hundreds of millions in re-branding itself “Beyond Petroleum” some fifteen years ago, many thought that here was a an oil company that truly would lead the renewable revolution. But BP dabbled in clean energy and then retreated. The move was about spin rather than substance.

Shell can carry on spending billions of dollars and carry on ruining its reputation searching for risky fossil fuels, that many believe will never be burnt due to climate change. They will become stranded assets. Or it could finally realise that yesterday was the closing of another chapter in the decline of the hydrocarbon age.

So if Shell really wants to rebuild it tarnished reputation, it should belatedly become a truly integrated energy company, with renewables at its heart.