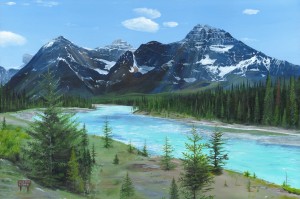 The issue of water is slowly creeping up the political and media agenda in Canada.

After last Thursday’s televised leaders’ debate being held in the run up to next month’s general election, one columnist for the influential Globe and Mail noted about the subject of water that “So many opportunities to bring up what should be the topic du jour – yet no one touched it.”

The paper went on to add that this was “regrettable” as the Prairies have been stricken by drought, California is also struggling with chronic water shortages and last week there was the news that Lake Powell, which supplies water to Nevada, Arizona and California, has lost more than half its water.

Indeed, scientists have been warning for a while that Canadian politicians need to address the issue of water, and increasingly how much the tar sands industry is using.

For example, David Schindler, a former University of Alberta Professor of Ecology whose team of researchers revealed how the development of the tar sands was having a catastrophic effect on the local Athabasca River, recently told one newspaper: “We are going to forget all about the economy when we run out of water.”

And yesterday there was another warning about the conflict between the tar sands and water.

Currently, the tar sands use just under three quarters of the water – some 72 per cent – that is extracted from the Athabasca River, and this is expected to increase dramatically over the next decade.

And now new academic research, published in the Proceedings of the National Academy of Sciences, reveals that the river is much more susceptible to multi-year droughts than previously thought, which means that the current extraction levels of water by the tar sands may not be sustainable, let alone the predicted levels.

The research has also revealed that the long-term flow levels of the river are declining, as climate change has caused reduced snow melt levels.This means that the river could dry up in the decades to come as the effects of climate change worsen.

And this could put the tar sands at risk, if ethical investment concerns or the oil price have not already put a hand brake on extracting the dirty fuel.

Currently the industry is allowed to extract water based on measurements taken since the 1950s, but the new research casts doubt whether these are representative of the river’s long term behaviour.

The research was led by University of Regina researcher David Sauchyn, who argues that “What we show is if you go back 900 years, the river is much more variable than you would think based on measurements since 1950s.”

Sauchyn based his analysis on tree ring data, taking samples from live and dead trees, and then used that to estimate the water levels of the last few centuries.

He says: “No one can predict the future, but if the region’s past 900 years is any indication, and you factor in climate change, you’re going to have a warmer situation that could mean the river will no longer be a sustainable water source for the tar sands”.