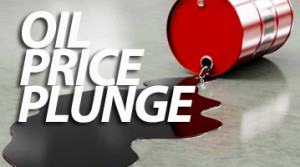 There is a temporary reprieve this morning for the oil industry as the oil price has climbed one percent on the news that US drilling has slowed yet again.

Whilst this is a small temporary reprieve, industry analysts are predicting that prices are expected to remain at low levels for the foreseeable future.

Moreover the small rise cannot hide the carnage in the oil industry as a whole caused by the oil price plunge.

A new report by respected industry consultancy, Wood Mackenzie, which is published this morning, argues that a massive $1.5 trillion of investment in oil and gas spending is at risk if the oil price stays around $50 a barrel.

In total “$1.5 trillion of uncommitted spend on new conventional projects and North American unconventional oil is uneconomic at $50 a barrel,” Wood Mackenzie said.

So the outlook for the industry is getting worse rather than better, especially for the US fracking industry and Canadian tar sands, which need a much higher price to be economic.

Many proposed projects, including North American shale, are “now out of the money, or in starker terms, uneconomic at $50 oil,” James Webb, upstream research manager at Wood Mackenzie, argues. “This spend is very much at risk.”

According to Webb, investment in oil and gas is already down $220 billion in 2015 and 2016 compared with the consultancy’s pre-oil price crash projections.

In addition to reduced activity in North American shale and tar sands, a total of 46 projects have been deferred as a result of the oil price fall.

Mr Obo Idornigie, Wood Mackenzie’s Principal Upstream Research Analyst gives further insight, arguing that: “The implications of this level of reduced investment is huge for the industry’s service sector which is of a size to comfortably accommodate an average of 40-50 new projects globally a year. We expect just six new projects to go ahead in 2015 and around ten in 2016.”

The consultancy is now arguing that the onshore industry needs to push through 10-15% cost reductions through “supply chain savings alone”.

And the future is indeed looking glum. A recent prediction from Goldman Sachs is that the oil glut may keep oil prices low for the next 15 years.