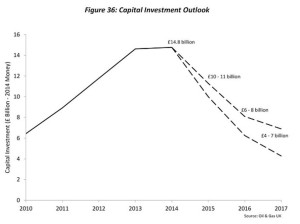 It is all too easy to think that the plummeting oil price has only caused serious pain to the North America oil and gas industry, whether it is shale gas or the Canadian tar sands.

But the low price is also affecting more mature areas of production and nowhere is that more so than the British North Sea.

Many in the industry predicted that the oil price would be rising by now, but they have been proved wrong. And as the price remains low, the pain being felt by the industry is spreading, with companies now preparing for a sustained period of low prices.

A report released by the UK industry yesterday reveals that capital investment in the British North Sea area will have halved in two years, with investment in the region plummeting by between £2 billion and £4 billion a year over the next three years.

The warnings have been growing for a while. Earlier this year oil giant BP warned the region was facing a “massive shock” due to oil price plunge.

Such is the cut back in spending that exploration for oil is now at the lowest levels since the seventies. The industry is fast contracting, with only seven exploration wells drilled this year. From 2012 to 2014, only 165 million recoverable barrels were discovered in the North Sea. And last year the industry found 60 million barrels, which amounts to three months production.

Just as has happened in the US shale industry, the North Sea now faces a period of acquisitions, sales and restructuring. The BBC reports that numerous smaller companies are now just limping along, “simply waiting to be bought“.

Deirdre Michie, Chief Executive of Oil and Gas UK said: “This great industry of ours is facing very challenging times. Last year, more was spent than was earned from production, a situation which has been exacerbated by the continued fall in commodity prices. This is not sustainable and investors are hard-pressed to commit investment here because of cash constraints.”

Michie added that: “It is likely that capacity may have to be reduced still further in order for the business to weather the downturn.”

The industry is responding by doing what it always does: pleading poverty and demanding even more lucrative tax cuts from the British Government. Michie is now calling for further “lightening” of the UK offshore tax regime to help the sector.

Beyond this, the industry is also seeking a “crisis summit” with the Government to discuss what more can be done to support it.