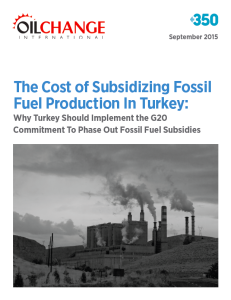 The Cost of Subsidizing Fossil Fuel Production In Turkey:
Why Turkey Should Implement the G20 Commitment To Phase Out Fossil Fuel Subsidies

Market distorting subsidies to fossil fuels contribute to greenhouse gas (GHG) emissions and impede the transition to sustainable, low-carbon development. In 2009, G-20 countries committed to phase out “inefficient” fossil fuel subsidies in an effort to specifically address climate change and boost investment in clean energy sources. It has been five years since the G-20 commitment, yet very little progress has been made to end these subsidies.

This year, Turkey holds the G-20 Presidency and as such sets the agenda for the G-20 Summit taking place in Antalya in November 2015. The G-20 Presidency’s Priorities rightly include a continued discussion on phasing out fossil fuel subsidies, and the recognition that 2015 is a crucial year for climate change with the United Nations climate negotiations set to agree a global deal in December. The G-20 context provides an excellent opportunity for Turkey to lead the G-20 to fulfill its commitment to phase out fossil fuel subsidies and make a significant contribution towards a global climate agreement.

One type of fossil fuel subsidy that is highly inefficient, as it supports the creation of stranded assets, is exploration subsidies. Scientists have determined that at least two-thirds of the world’s current, proven reserves of oil, gas, and coal must not be burned if we are to avoid raising global temperatures above 2 degrees Celsius – the globally agreed limit. Thus, any activities involved in fossil fuel exploration are incompatible with preventing the worst impacts of climate change, and even most of already-proven reserves will end up as stranded assets, which can never be used or burned. Despite this reality, G-20 governments continue to provide an estimated US$88 billion annually to encourage further exploration.

• The Turkish government provides an estimated US$300 million to US$1.6 billion (TRY 683 million to TRY 3.6 billion) per year in fossil fuel producer subsidies, depending on what investments are made in a given year.

• In 2013, Turkey provided some US$500 million in public funding specifically for fossil fuel exploration. Turkey’s government-funded coal exploration program has increased coal reserves by over 50 percent since 2005, opening up 5.8 billion tons of new coal to be mined.

• The single largest persistent subsidy identified equals US$250 million to over US$400 million (TRY 569 million to TRY 910 million) a year in support to hard coal enterprises.

• The 2012 New Investment Incentives Regime provides a higher level of subsidies to oil and coal investments than to renewable energy – encouraging carbon-intensive infrastructure projects over clean energy sources. The elevated incentives represent a potential subsidy for coal alone of US$11.6 billion (TRY 26.4 billion) based on planned new lignite coal power plant capacity of 14.5 GW for 2012 to 2030.

Fossil fuel subsidies threaten Turkey’s economy, straining the budget, increasing government liabilities, and heightening the risk of stranded assets. More importantly, these subsidies negatively affect public health, climate stability, the transition to clean energy, and prospects for EU membership. Given these concerns, it is recommended that the government of Turkey reduce fossil fuel subsidies domestically and at the same time, while holding the G-20 Presidency, encourage the G-20 to implement its commitment to phase out inefficient fossil fuel subsidies.

Fossil fuel subsidies that directly threaten the goal of limiting global temperature rise to as far below 2 degrees Celsius as possible, and those for new fossil fuel investments that serve to lock countries into carbon-intensive infrastructure for the next 20 to 50 years, need to be immediately eliminated. With this in mind, Turkey and the G-20 should specifically:

• Agree to immediately eliminate all subsidies for fossil fuel exploration. In particular, Turkey should:

– End government-funded fossil fuel exploration activities such as those conducted by MTA, TPAO, and TKI;

• Ensure infrastructure investment frameworks do not provide subsidies to fossil fuel projects, both nationally and bilaterally, including ending public finance for fossil fuels through loan guarantees and export credit support. In particular,Turkey should:

– For Turkey, a timeline should be set to phase out all producer fossil fuel subsidies starting with coal. A strategic transition, i.e., one that ensures new employment opportunities for miners, reduces budget support to hard coal mining operations, and phases out existing power plants that utilize hard coal, should be a priority.