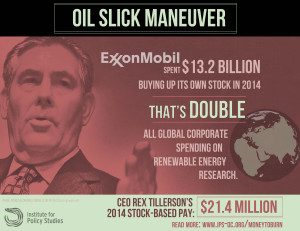 We may be living in a global age of austerity but you had better tell Big Oil that. A report by the Institute for Policy Studies (IPS) reveals that fossil fuel bosses are receiving “stratospheric” levels of pay to explore and produce oil which we cannot afford to burn, if we are to avoid catastrophic climate change.

The IPS report, entitled, Money to Burn, outlines the total madness of the situation. The world’s largest fossil fuel companies are currently holding carbon reserves which would emit approximately 2,800 gigatons of carbon dioxide if they were all burnt.

This is five times more than we are told we can safely burn and yet driven by “short-term perverse CEO pay incentives”, the leading fossil fuel companies are spending over $600 billion a year to locate additional carbon reserves, which the scientists are saying can never be burnt.

Despite the warnings from scientists that the vast majority of carbon reserves need to stay in the ground, all 13 oil producers IPS’ list of 30 major U.S. fossil-fuel corporations reward executives for expanding their carbon reserves.

This may make no rational sense, but the fossil fuel bosses are literally making a killing. According to the IPS, the CEOs of these 30 largest fossil fuel companies averaged $14.7 million in total 2014 compensation, which is nearly 10 per cent more than the S&P 500 CEO average.

The top two highest-paid executives — the CEOs of ExxonMobil and ConocoPhillips — made more than twice the S&P 500 average in 2014. Ironically the more the senior executives make the more they are insulated from the effects of climate change.

Topping the list is Exxon’s Rex Tillerson who pocketed a whopping $33 million in 2014, raising his total compensation over the past five years to $165 million. Let us not forget that Exxon continues to fund the climate denial industry too.

But it is not just the CEOs who are making a buck at the expense of the climate. These firms’ management teams have taken home $6 billion over the past five years.

To put that into context: it would be enough to weatherize 3.3 million homes or double the $3 billion U.S. pledge to the Green Climate Fund, a new institution to help vulnerable nations address climate change.

In the United States, meanwhile, $6 billion could cover the cost of weatherizing the homes of 3 million low-income families or installing the residential solar panels that would leave 270,000 homes energy independent.

The fossil fuel companies could have also invested heavily in renewables, but instead in 2014, 23 of the top 30 fossil fuel companies spent a combined $38.5 billion on share repurchases. That was six times global corporate spending on research into renewable energy that year. As the IPS points out: “Buybacks artificially inflate share prices, which, in turn, inflates executives’ stock-based pay.”

Even in retirement, the bosses will be profiting at the climate’s expense: Top fossil fuel executives have accumulated company-provided retirement assets worth a combined $1.2 billion, “at the same time their indifference to environmental degradation has been putting the futures of ordinary people at risk”, argues IPS.