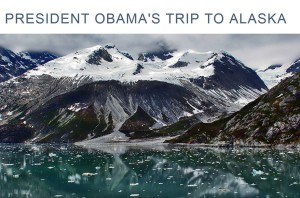 President Obama’s Arctic tour continues to make global news. Yesterday Obama, who has become the first President to visit the region, warned that “Climate change is no longer some far-off problem; it is happening here, it is happening now.”

Addressing a conference on climate change, Obama adopted a tone described by the New York Times as verging on apocalyptic to say that “We’re not acting fast enough”. He used that phrase four times in a twenty four minute speech, as he urged his audience to act faster.

“I have come here today, as the leader of the world’s largest economy and its second-largest emitter, to say that the United States recognizes our role in creating the problem and we embrace our responsibility to help solve it,” he added.

Obama went onto to say that the global fight against climate change starts in the Arctic. But herein lies his problem. As my colleagues have been repeatedly pointing out over the last few weeks, there is a huge sense of hypocrisy and irony that Obama is speaking about the need for urgent action on climate change in the Arctic, a region at the forefront of global warming, just days after his Administration allowed oil giant Shell to start drilling in the Arctic for oil.

Indeed, Obama’s speech yesterday was met by activists protesting against that decision, carrying banners saying “Save the Arctic” and “#Shell No.”

In trying to justify Arctic drilling, the Administration is using flawed energy forecasts from the Energy Information Administration which basically predict such a high level of fossil fuel use that it will lead to climate chaos. As my colleagues have also pointed out, until the Obama Administration aligns its climate and energy policy, it will be continued to be locked into these hypocritical positions.

Whichever way Obama tries to duck and weave and ignore the protests, the science is against allowing Shell to drill in the Arctic. Last month, OCI and Greenpeace produced a report outlining the reasons against Arctic drilling, called Untouchable. Put simply the report argued that “Arctic oil is wholly irreconcilable with stated national and international objectives to address climate change.” It fails the climate test.

Scientists are saying this too. Earlier this year Christophe McGlade and Paul Ekins wrote in the journal Nature: “We show that development of resources in the Arctic and any increase in unconventional oil production are incommensurate with efforts to limit average global warming to 2 degrees Celsius.”

The bottom line which Obama cannot ignore is that to allow drilling in the Arctic is to accept that the 2 degree Celsius limit will be exceeded, the very limit that Obama is trying to push for at the UN Paris talks in December.

As the Times points out, his Arctic trip is highly choreographed “to lend vivid visual justification — in the form of receding glaciers, eroded shorelines and rising seas” to Obama’s push for an historic climate deal in Paris in December.

This leaves Obama with a big problem. The more he talks up the need for action on climate change but his words are not followed by deeds, then the more he looks like a total hypocrite.

For example, Elijah Zarlin from Credo Action, who worked for Obama’s 2008 election campaign, now says “The hypocrisy just speaks for itself when you hear him saying things like ‘this is our wakeup call,’ given his record on oil, gas, and coal extraction. His words [on climate change], which are powerful, just ring more and more hollow.”

This is increasingly not lost on sections of the media. As the Times notes, Obama failed to “address the contradictions in choosing Arctic Alaska, where he has just approved offshore oil drilling by Royal Dutch Shell, for his call to action on the climate.”

One commentator for CNN argues that allowing Shell to drill in the Arctic is “clearly not smart climate policy”, which “doesn’t position the United States well for the Paris climate talks.”

Yesterday, Obama also attacked Republicans who continue to deny climate science. “Those who want to ignore the science, they are increasingly alone,” Obama said. “They’re on their own shrinking island.”

But this is exactly what Obama is doing: ignoring the science on Arctic drilling. At the start of the trip, Obama said that Mt. McKinley, America’s tallest mountain, would be renamed Denali, the name used by First Nations for the mountain.

Maybe he should have labelled it “Denial” instead to reflect his Administration’s stance on climate: He says it is time to act, but as long as he allows Shell to drill in the Arctic, he is in denial of the true nature of the problem.