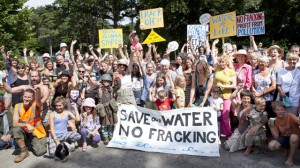 The Conservative Government’s full-frontal assault on Britain’s internationally-respected planning process has become apparent this morning, after it was announced that Ministers will fast-track fracking applications overriding local councils.

The new measures will basically give local councils just sixteen weeks to determine whether a fracking application can proceed.

If local councils go beyond this point, the Government will step in and over-ride them. And given their vehemently pro-fracking stance, it means that fracking will be automatically granted.

According to the Energy Secretary Amber Rudd: “We are backing the safe development of shale gas because it’s good for jobs giving hardworking people and their families more financial security, good for our energy security and part of our plan to decarbonise the economy.”

Rudd’s analysis is flawed on so many levels it is deeply worrying. Firstly, fracking is not safe, it hardly creates any jobs, there is no evidence that it will make the UK more financially secure, and someone should point out to Rudd that shale gas is actually a fossil fuel, and therefore will not help decarbonise the UK. Indeed, because of high methane leakage rates, fracking could be worse for the climate than coal.

Indeed, one anti-fracking campaigner just posted something on-line saying simply: “How stupid do they think we are?”

But it gets worse. Ironically the greater the local opposition to fracking and the more letters of opposition, and the longer the local planning process is, the more likelihood the sixteen week cut-off point will be reached and therefore this will give the government the excuse to step in.

Fracking companies could now cynically submit so much information – effectively overwhelming a local council – that by default a planning application will not be processed in time, meaning it will be automatically moved to the Government who will rubber stamp its approval.

And even if the government wanted to be seen as being fair-minded about the planning application, what is equally obvious is that a Government Minister would not have the technical expertise to understand the geological risk, environmental risk, financial risk, nor would they read hundreds if not thousands of letters of objection. So they would be making a decision based on total ignorance.

As representatives from Lancashire County Council said this morning, given the huge amounts of technical information they had to process with Cuadrilla’s application, and given the thousands of representations from the public against fracking (all of which had to be processed), there was no way the Council could have made a decision in sixteen weeks.

Lancashire councillors have been very vocal in their opposition this morning to the announcement: County Councillor Jennifer Mein, the leader of Lancashire County Council, said: “I would be very concerned if they chose to take these decisions out of the hands of local representatives.”

Marcus Johnstone, a cabinet member for Environment, Planning and Cultural services at the county, added: “I can see what the direction of travel is: it’s to remove local determinism, and the right of local people to have a say.”

Anti-fracking campaigners are also rightly furious:  Barbara Richardson, from the Roaseacre Awareness Group which fought Cuadrilla’s plans said “this is undermining democracy and I am appalled and angered by what Amber Rudd is saying.”

Anjie Mosher, of the Lancashire “Nanas” protest group added: “It would be an outrage if the government forces fracking through. People in Lancashire don’t want it. This shows democracy is not alive and well in this country.”

National environmental groups are worried too. Naomi Luhde-Thompson, Friends of the Earth’s planning adviser, said: “Bulldozing fracking applications through the planning system, against the wishes of local people and councils, will simply fan the flames of mistrust and opposition.”