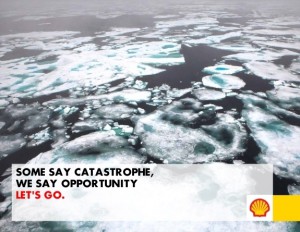 For a while now a growing number of people have been asking a series of pertinent questions about Shell’s Arctic drilling operations, which could probably be boiled down to this:

Why would the global oil giant risk billions of dollars of its own money, irreparable damage to a pristine environment, as well as exacerbate climate change by drilling in the Arctic for oil that we can never afford to burn?

It does not make sense financially, ecologically or from a climate perspective. You don’t have to hang off a bridge in Portland saying #ShellNo to question Shell’s collective wisdom in drilling in the Arctic.

To understand what Shell is doing and the fundamental risks Shell is taking, one really has to understand Shell as a company.

This is an oil giant that has been through great public and private trauma over the last three decades of which two are the most important:

Some will argue that the company has never recovered from these episodes, that they made a risk-adverse company with an eye on its public image even more risk-adverse and image conscious. But if that is true, it makes Shell’s Arctic adventure even more worrying or even more a company at odds with itself.

Furthermore, let us remember that of all the major oil companies, Shell is often seen as the one with the best “brain”, if you can call it that. It employs great minds to predict the future in different scenarios, from complete blue-sky thinking to different economic scenarios. “We help create memories of the future,” Jeremy Bentham, who took over Shell’s future scenario unit in 2006, says in an interview with Bloomberg.

Of all the articles I have read on Shell’s Arctic quest, the Bloomberg piece is certainly one of the most informative, drilling down (if you excuse the pun) as to why Shell – the supposed risk adverse, level-headed oil company – is walking where others fear to tread.

As Bloomberg asks why is Shell “doubling down on the Arctic amid a worldwide supply glut, and at the same time that many politicians are vowing to address global warming. Among the major oil companies, it stands out for its frank discussion of the threat posed by its business to the world’s climate. Its top executives have even professed a desire to rethink fossil fuels and move toward renewable energy sources. And yet it’s assuming immense operational risks to drill in the Arctic.”

And in the article we find a clue as to Shell’s internal mentality: Shell’s quest for Arctic oil, is “not about Shell exploring for hydrocarbons in the Arctic,” says Dave McCormick, who worked for the Shell for 30 years, including on the Scenarios team from 2002 to 2009. “It’s society that is demanding this energy.”

If you stop and pause for a moment you realise that the thinking behind Shell’s Arctic adventure is totally and utterly flawed. The company is trying to absolve itself from blame for its own actions. It is society to blame forcing Shell into the Arctic, and not the company itself.

For Shell to accept that view it is saying that, as one of the largest oil companies in the world, it cannot lead society into a clean energy future by developing new technologies, it will lead them with the technologies of the past – like fossil fuels.

It is complete and utter nonsense. The company is trying to absolve itself of any responsibility whatsoever. Shell is not “creating memories of the future,” it is, instead destroying our future, and blaming us in the process.

If it refuses to map out an alternative vision – then we as journalists, researchers, activists, analysts, pundits, financiers and society as a whole – have to map out the alternative future for it.

You don’t have to rappel off a bridge in Portland – as Greenpeace climbers recently did – to be part of that conversation.

But what is becoming increasingly clear is that those who have an alternative vision to Shell’s Arctic folly, need to make their voices heard. We cannot allow the company to create the memories of the future – we have to create our own.