The U.S. Export-Import Bank (Ex-Im) provides financing and insurance for the export of U.S. goods abroad, including an average of over $4 billion dollars each year over the last 7 years for oil, gas and coal projects. Ex-Im’s authorization, which needs to be renewed periodically by Congress for the Bank to stay in business, has currently expired, and Ex-Im is facing something of an uphill battle in getting going again.

In late July, the Senate voted to reauthorize Ex-Im as an amendment to a crucial highway spending bill during a late-night session. This Senate vote sets up a showdown with the House, as most House Republicans bitterly oppose reauthorization, and see Ex-Im as corporate welfare.

The Senate amendment, proposed by Sen. Mark Kirk (R-Ill), contains language that aims to gut limits on Ex-Im ’s ability to finance greenhouse gas-intensive infrastructure. The Obama Administration first pushed to end most U.S. finance of coal-fired power plants overseas in 2013 – a commitment that included Ex-Im . On the other side of the coin, Ex-Im is also supposed to allocate 10 percent of its total financing to renewable energy and energy efficiency.

With the fate of Ex-Im (and its limits on coal finance) in the balance, now is an opportune time to reflect on Ex-Im’s recent performance on both fossil fuel and renewable energy finance (See Table 1). 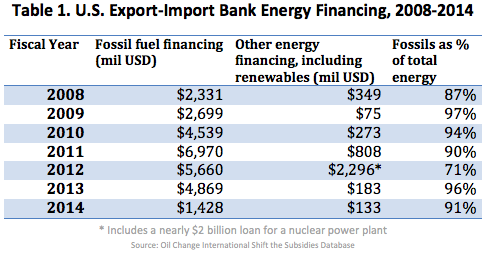 The picture that emerges from the data is not encouraging. Ex-Im hasn’t come close to meeting its renewable energy mandate (most years the Bank doesn’t even lend 10% of its energy portfolio to renewable energy and energy efficiency, let alone 10% of its entire portfolio), and Ex-Im continues to provide a significant amount of funding to fossil fuels. Its promise as a big booster of renewable energy exports is a long way from being fulfilled.

If Ex-Im is reauthorized with language that weakens its coal finance provisions, the picture could get even bleaker. On the other hand, if Ex-Im isn’t reauthorized, would we really miss it?